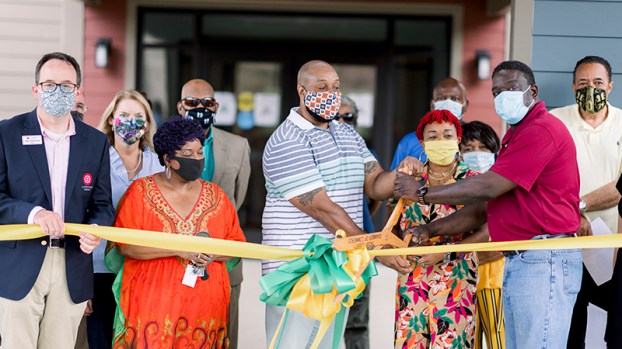 The Lagrange Housing Authority cut the ribbon on its new Phoenix Landing Apartments after months of construction.

After months of construction and moving residents in, the LaGrange Housing Authority held a ribbon cutting for its new Phoenix Landing Apartments.

According to LHA Director Zsa Zsa Heard, the apartments are a $12 million investment into the city of LaGrange.

Formally known as the Benjamin Hill apartments, the Phoenix I will be torn down at the end of September.

“All of the residents from over there have been living in here for about two months now,” Heard said. “This building is a brand-new structure. The building they moved from was 66 years old. They have not had had new plumbing, new tubs, new anything. Those buildings are connected and were all like military barracks.”

The apartment complex is a three-story, 70-unit apartment with one, two and three bedroom accommodations.

“In the old buildings, if the plumbing tore up in one of the buildings then the whole building would be out,” Heard said. “These buildings now, we have a resident who has never had more than one bathroom, and we were able to put her in a room with two bedrooms and two bathrooms. Who can have kids now and not have two bathrooms?”

“The rooms are bigger, they have all energy appliances and the building is all energy efficient,” Heard said. “That lowers the utility bills. Mostly here are senior citizens and persons with disabilities, so they are all on a fixed income.”

Heard said it was important to her and her team that they made the building cost efficient for the residents while also making it a nicer area.

“We really want to make the area look good so that when we build our next building everything continues to look good,” Heard said. “That is important. If the area does not look good, who would want to live here. When I was younger, I wasn’t allowed to come down this area because my parents thought it was a bad area. Now, I come here early and late and have never felt afraid.”

Heard said they will continue to bring up the area over the next few years with new builds.

“We want people to feel good and safe about where they live,” Heard said. “This was very important to us because we have a lot of seniors living here. They really need something that is affordable and safe. Especially since some have their grandchildren that they are raising here.”