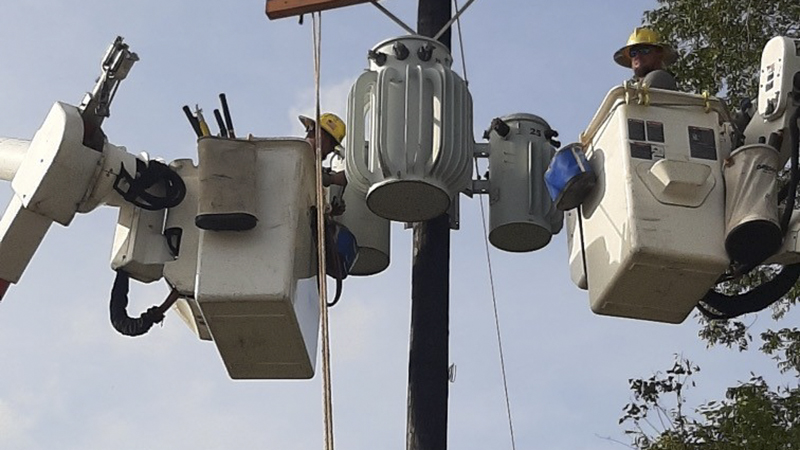 A City of LaGrange utility crew has been in Welsh, Louisiana, assisting with power restoration following the damage caused by Hurricane Laura.

According to The Weather Channel, some 200,000 people in Louisiana had no access to water because of damage to water systems. More than 500,000 homes and businesses remained without power.

The following LaGrange Utility workers are assisting in Louisiana: Linwood Mitchell, Kyle Hyatt, Jamie Foster and Taylor Atkinson. The four left on Aug. 26 on the eve of the storm and have finally made their way back home on Tuesday.

Electrical Foreman Linwood said that almost the whole population of Welsh was without power after the storm came through.

“There were a lot of broken poles and a lot of trees were down,” Linwood said. “Their system was already really old and was not staying up too well. The transmission line was down which caused a big hold up as far as getting the power back on.”

The population of Welsh includes approximately a little over 3,000 people and sits between Lafayette and Lake Charles, Louisiana. Linwood said that the city already was struggling financially.

“It wasn’t until about five to six days after the hurricane hit that we were able to get power back on to parts of the city,” Linwood said. “Even after we got it back on we had to fix a lot of lines.”

He added that even before Hurricane Laura hit, there were already a few broken poles throughout the system.

“They didn’t really have an electrical department,” Linwood said. “They were struggling for help and to get by. The hurricane was even more devastating to them.”

After the hurricane came through, the crews were able to upgrade the system and a large majority of the electrical problems the city was dealing with before the storm.

“We were able to upgrade their entire system,” Linwood said. “It will make you appreciate your electrical system compared to other towns.

Multiple crews from all over Georgia were in Welsh and other surrounding cities helping to get power back on. Municipal utilities including the City of LaGrange work together to help each other following major storm events like Hurricane Laura.

“I’ve done quite a few of these trips after hurricanes to help restore power to areas,” Linwood said. “After about 30 years, I have had my fair share of them. All the people in the community were super nice and very appreciative.”