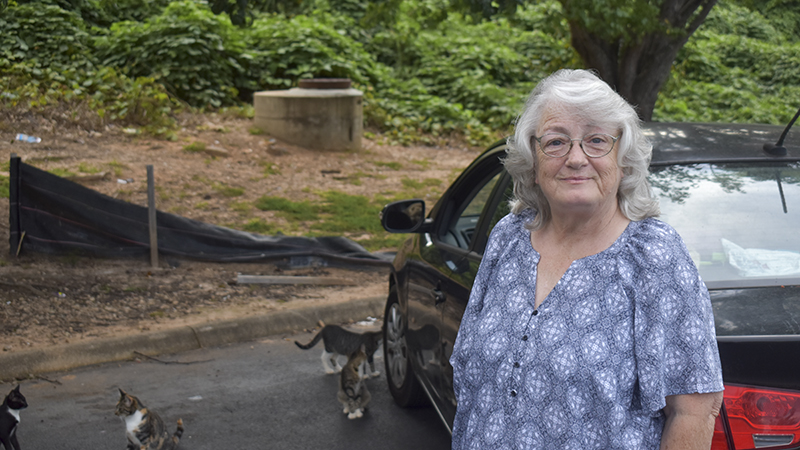 Brenda May stands in front of her car at the Kroger parking lot off Commerce Avenue. The lot is the first of 12 spots where May feeds feral cats daily in LaGrange.

Around 7 p.m. on Thursday night, a group of eight feral cats waits at the southwest corner of the Commerce Square shopping center, which includes the only Kroger in LaGrange. They are not far from the Kroger Fuel Center, pacing in the grass near a tire air pump.

Their home is a kudzu-covered hillside sandwiched between the parking lot and the neighboring shopping center, which hosts a Publix. The cats are all adults, of varying coats — tabby, tuxedo, calico. For strays, they appear to be healthy and well-fed. Upon the sight of a black Kia Forte approaching, it’s clear why.

The cats perk up, meowing and waving their tails. They circle the car as it parks.

LaGrange resident Brenda May gets out of her car and promptly begins her routine, greeting them.

She bangs six cans of wet food on the asphalt, then pours out a line of kibble. There’s also a large glass water bowl she replenishes.

May’s just getting started. She got a late start Thursday — normally she would start feeding around 6 p.m., and this is the first of twelve stops. At 10-15 minutes per stop, she spends about two hours feeding the cats. She does so every night, including holidays, rain or shine. She’s been doing it for 25 years.

“This is one of the bigger groups right here,” May explained. Some of the groups are just three to four cats.

Her other spots on Commerce Avenue include one behind McDonald’s near Shadowlawn Cemetery, as well as the Autozone on Commerce, the Dollar General on Commerce and the Food Depot on Hogansville Road. Then, she does the second half of her route at six locations on Lafayette Parkway.

A fellow cat-feeder and friend, Sandra Fowler, has a dozen or so spots, too.

Together with a third feeder, Dana Wild, they feed an estimated 100-150 stray cats per day.

Many of those cats have been neutered or spayed by the Mosa Fund, a local nonprofit founded and run by Nancy Yates, with help from May, Fowler and Wild. Mosa captures, fixes and gives rabies shots to feral cats by working with local veterinarians, including Drs. Brian and Kerry Kirby of LaGrange Veterinary Hospital, as well as Dr. Amanda Greathouse and Riverside Veterinary Hospital in Lanett, Alabama. 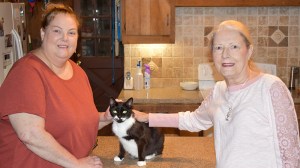 Mosa has operated since 2009, fixing stray cats, or simply paying for and arranging fixings for cat owners who can’t afford it. They’re approaching 2,300 fixed cats, Yates said. The number of kittens prevented, then, is exponentially higher, in the tens of thousands. Mosa’s motto sums up the goal: “No unexpected kittens.”

Until the pandemic hit, Mosa would buy Greathouse’s service, once a month, for a full day and fix 16 cats. They’re starting that back up soon and will work with Greathouse on Sept. 25. The Kirbys fix a few cats every week for Mosa.

During COVID-19, Mosa’s had to scale down fixings based on what the vets can accommodate, and have focused on spaying females.

“I mean I know it takes two to tango, but that’s where the kittens are coming from,” Yates said.

Yates said they don’t turn anyone away. They ask people not to feed their cats the night before surgery, and to bring their cat in a plastic container lined with newspaper or paper towels.

They also ask for bags of cat food, if the owners can afford it. They prefer quality food — brands Yates approves of include Friskies, 9Lives, Meow Mix and Purina Cat Chow.

Despite never running ads or being on social media, Mosa members “keep on trucking,” Yates said.

“We’ve always had money, through the grace of God, to pay to fix them,” Yates said.

Mosa is about to embark on its annual letter-writing campaign, where they will send about 85 letters out to supporters.

An informal network of cat-lovers support Fowler and May’s feeding, donating bags of cat food, money or gift cards to pet stores. They also get support from bystanders.

May’s story starts in 1995, when she was at a restaurant off West Point Road near the railroad tracks, and found a kitten laying on the ground in rough shape.

“It was so near dead, ants was already on it,” May said.

So, she took it home, cleaned it up and started nursing it back to health.

“I remember seeing other cats around there too and I said, ‘You know, if those cats are there, there’s cats everywhere.’ And so I just started going around to places,” May said.

Yates has a similar backstory, which provided the name for the Mosa Fund. Yates took in a stray cat, Moses, that she nursed from when it was a day old, until it died of a heart attack at the age of two.

Moses was a rare, “flame-point” Siamese cat — white with orange ears and an orange mask, orange legs and tail and the “bluest eyes you’ve ever seen,” Yates said. After Moses died, Yates called shelters all over the Southeast — one place told her they only get one once every two years. Eventually, however, she found two more, one of which was named Mosa, and lived to be 14.

Fowler feeds cats at locations downtown, at Granger Park, and on Hogansville Road and Greenville Street. Some of Fowler and May’s spots overlap, so the cats may get fed more than once a day. Wild helps out with feeding when she’s needed, she said. She and her husband have taken in between 45-50 cats over the years, many of whom were brought to them sick or pregnant.

Yates also feeds some cats, including one she’s dubbed “Lil’ Mama.” Lil’ Mama has had at least three litters of kittens — Yates has slowly earned the cat’s trust, and plans to finally get her spayed soon.

That’s a common method for the members of the Mosa Fund.

“I personally don’t like traps, I use them only as a last resort. What I like to do is befriend them and get them to trust me,” Fowler said. “They’re very friendly with the people that look after them, because they trust them.”

The cats May sees on her nightly route recognize her car and voice.

“I’m probably the only one that can get close to them … some of them I can reach down and rub you know,” May said.

Her close relationship with the cats doesn’t mean, however, that there’s never been incidents.

“I’ve been tore up dripping blood where one attacked my arm,” May said, adding that she gets regular tetanus shots.

She once contracted Rocky Mountain spotted fever from a tick due to “beating around in the bushes,” while helping cats. The symptoms of RMSF can come back occasionally, causing May to have to take antibiotics.

Plus, there’s been some resistance from humans, too. Not everyone wants to give money for cat food.

“I had a man chase me off his property one time in his car. But that’s been years ago,” May said.

May acknowledges, though, that she and others have created a cycle of dependency and “messed up nature” for the cats, who don’t need to hunt for their food anymore. 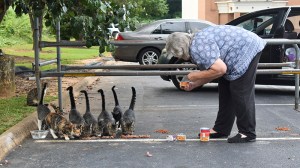 Brenda May feeds feral cats at the Kroger parking lot.

Fowler, though, emphasized members’ two-pronged approach of feeding existing cats, while doing what they can to prevent more from appearing.

“I think the majority of the people in Troup County that have read about the Mosa Fund and the work that it’s done, understand and appreciate that we’re trying to keep the population down,” Fowler said.

Another problem, though, is that Fowler thinks it may cause people to abandon their cats with the knowledge that someone will step in and feed them.

“If they have a cat that they don’t want, they just feel they should dump it off on Brenda or myself because they think it will be taken care,” Fowler said. Still, she said that’s preferable to people dumping cats in a remote area with no support.

Mindful of their impact, May is careful not to leave trash, only leaving a water bowl at her feeding spots.

Getting scratched or being told to leave isn’t especially common, however. The real challenge is buying cat food. Except for the driver’s seat, May’s car is chock-full of the stuff.

May drove a school bus for 22 years before retiring in 2016 at 65, but went back to work last year to pay her bills while continuing to feed cats.

For Fowler, feeding the cats comes from a “need to nurture.” She also does some work to support her cat feeding, cleaning a few houses a week. She estimates she spends $600-700 a month on cat food. May works at Tractor Supply Company off of Lafayette Parkway, where she gets an employee discount and gets bags that are punctured for half price.

It’s a 501(c)(3), so donations are tax-deductible, Yates emphasized. May encourages anyone who’d like to donate cat food, gift certificates or money for feeding the cats to call her at 706-415-1236.

“They’re just lil’ old animals out here, you know, trying to live out here like everything else,” May said.