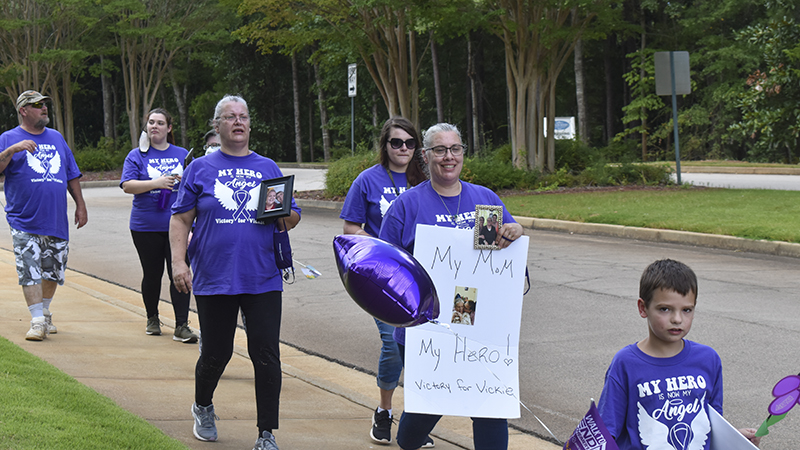 Families across LaGrange walked to support finding a cure for Alzheimer’s disease Saturday as part of the 2020 Alzheimer’s Association Walk to End Alzheimer’s.

Due to the pandemic, there was no single, unified walk this year. Instead, those who participated were asked to walk as individuals or in groups in their own neighborhoods.

Groups that walked together formed teams, with 21 teams participating. Participants in LaGrange collectively raised $30,715. The associations goal was to raise $55,000 in LaGrange, but people can still donate until the end of 2020.

The walk is “the world’s largest event to raise awareness and funds for Alzheimer’s care, support and research,” according to The Alzheimer’s Association. The event kicked off with a virtual opening ceremony in the morning.

Kristi Hart and Sherry Clemons are sisters who watched their mother and grandmother die from Lewy Body dementia, a form of dementia similar to Alzheimer’s. Hart and Clemons both work for Wellstar — Hart as an ultrasound technician and Clemons as a home health case manager.

Hart, Clemons and their family members walked in memory of those they had lost to Alzheimer’s at noon Saturday at Vernon Woods Retirement Community. Vernon Woods also had a “promise garden” where pinwheel flowers were placed.

The flowers, normally held by people as they walk, are color-coded based on whether someone is diagnosed with the disease, has lost someone to the disease, is a care worker or is simply a supporter.

This is their fifth-year walking. Their mother, Vicky Davis, died one day after last year’s walk, Sept. 15, 2019.

“Today it’s important for us to do this because even though she’s not with us, she’s with us,” Hart said.

Hart said her grandson, Carter, asked her the other day, “How many days do I have left with you?”

Hart and Clemons are both in their 60’s, which is when symptoms first developed in their mother and grandmother.

Hart described the first time her mother forgot her birthday, and how, toward the end, she could recognize her daughters, but not remember their names. Davis’ husband died before her, and Davis would relive her grief every time one of her daughters informed her that he was gone.

Hart and Clemons’ team, “Victory for Vickie,” raised $685, the third largest total among the LaGrange teams.

In addition to soliciting donations, they sold goodie bags with candy and reusable straws.

Their team goal had been $1,000, but Hart and Clemons said it was more of a challenge this year due to the pandemic and economic downturn.

“We made the effort and tried, so that’s all that matters,” Clemons said.