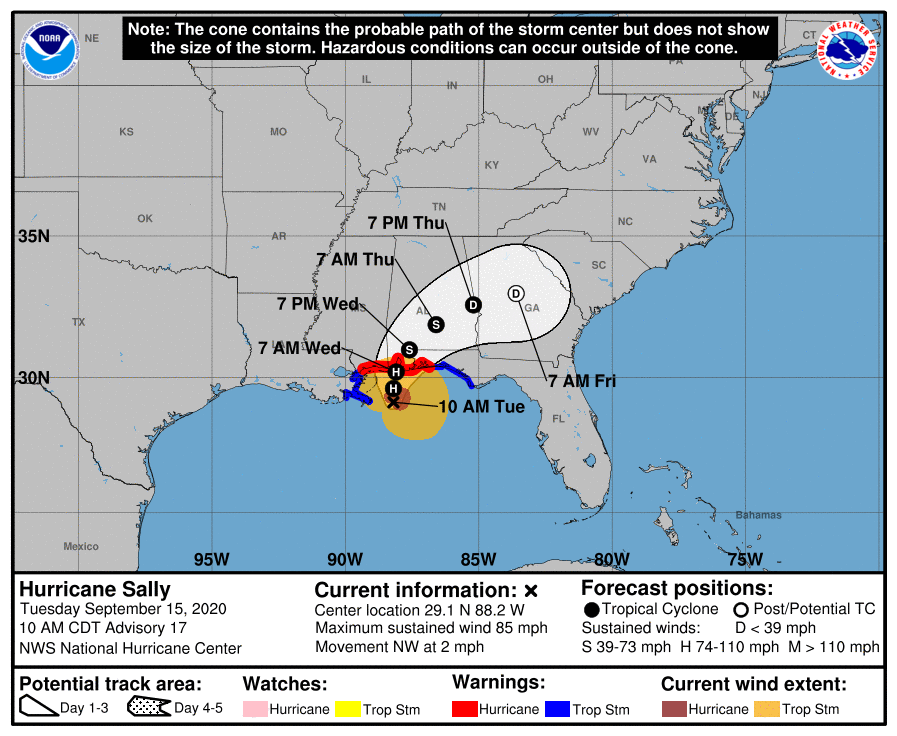 As Hurricane Sally approaches land near the Mississippi-Alabama line, the hurricane is expected to move northeast later this week, with current projections placing West Central Georgia in its path.

According to Matthew Sena, a meteorologist with the Peachtree City office of the National Weather Service, Sally is already showing signs of weakening and will likely be below the level of a tropical storm by the time it enters Georgia. Sena emphasized there was still a lot of uncertainty, but he said people in the LaGrange area should be prepared for the possibility of flooding.

“It should weaken fairly quickly as it moves onshore,” Sena said.

Rain will start soon, continuing throughout the week and likely peaking on Thursday. He said the primary threat to the LaGrange area is the potential for moderate flooding. Areas along the path of the system could see 4 to 6 inches of rain, with higher totals in isolated areas that are hit heaviest. A Facebook update released by the Peachtree City office around 11:15 a.m. Tuesday said “Widespread 2-4″ of rain are possible across most of the area, with an axis of higher totals of 6″+ along the I-85 corridor from LaGrange -> Atlanta -> Athens.”

The “shield of heaviest precipitation” should arrive in Georgia very late Wednesday or early Thursday, and will probably continue throughout Thursday, Sena said. The storm should be gone by late Thursday or early Friday.

Heavy rainfall could cause some flash flooding, Sena said, that could eventually flow into rivers and lead to a river flood that would last through the early or middle days of next week. People that live in areas prone to flooding or on rivers should be especially prepared, he said.

“Now’s not a bad time to start finishing up any preparations,” Sena said, adding that people should not wait until the storm’s path is certain.

Sena predicts the system, once it reaches Georgia, will produce winds of 10 to 20 mph, with some winds reaching up to 30 mph. Wind isn’t likely to be a large issue locally, he said, but a few trees may come down.

Daytime temperatures in the second half of the week should be mild, in the mid to upper 70s, Sena said.