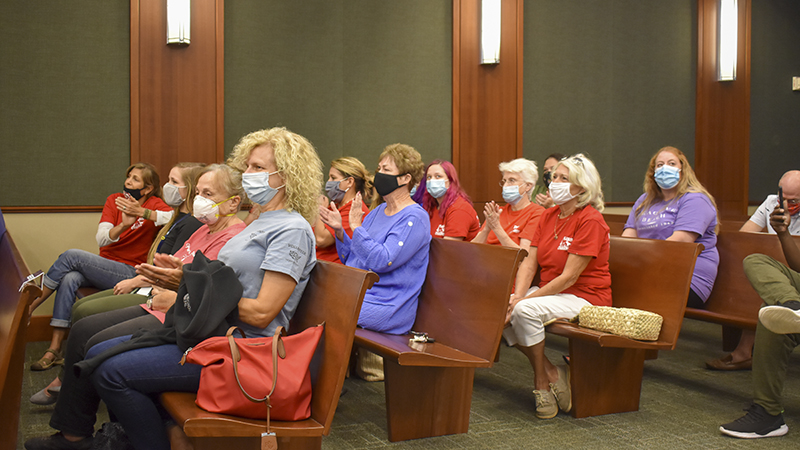 The Troup County Board of Commissioners announced nine appointees to the Animal Control Advisory Committee at its meeting Tuesday evening.

The committee will be tasked with reviewing the county’s animal ordinance, comparing it to ordinances in other communities and coming up with recommendations as to whether it should be changed.

Harris is a veterinarian at Animal Health Clinic on Morgan Street. Commissioners had said previously that it was important for a vet to serve on the committee.

Smith is a local sheep farmer who spoke at a meeting in July, cautioning the board from changing the ordinance without input from farmers.

Kettler is an animal rights advocate who has been leading the charge for reform and has been successful in lobbying for changes to the city or county code in the past.

Kettler attended the meeting along with about 20 other animal rights advocates affiliated with local nonprofit Paws 4 Chainge. The group applauded when commissioners unanimously approved the list of names.

Kettler and others have asked commissioners to ban tethering in the county, as well as more closely define what constitutes clean water and shelter for dogs.

Crews announced the creation of the board in August, which he hopes will include voices from people with different perspectives.

“We’re not experts in all of this and animal ordinances, and what’s probably the best,” Crews said.

Smith and others had concerns that changing the ordinance may cause some farmers in rural Troup County to be in violation.

“It is going to be a little bit of a complex issue in that you’re trying to balance the needs of all of Troup County,” Crews said at the meeting.

After the meeting, Kettler said her first priority on the committee would be pushing for a ban on tethering (chaining, unlike tethering, is already banned).

“I’m glad I’m on the board,” Kettler said, “It took 18 months to get a ban on chaining dogs. I just don’t want to see that happen again because winter is coming and dogs deserve better.”

The county will now contact the appointees and confirm they’re willing to serve on the committee. Crews said he hopes they can meet for the first time in about two weeks.