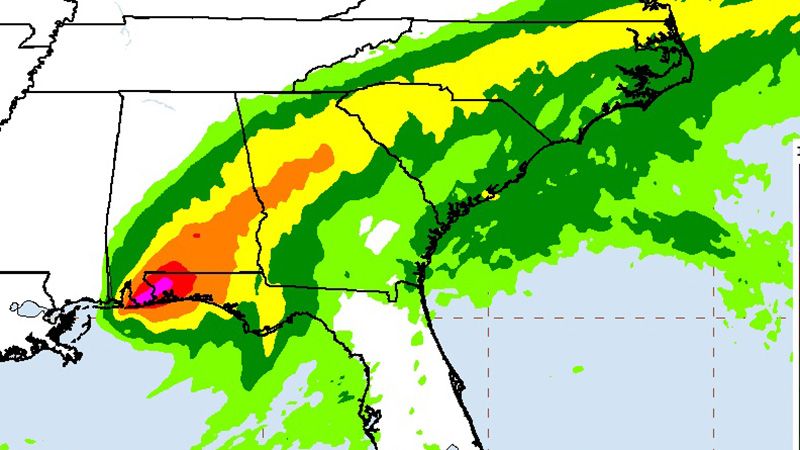 City of LaGrange and Troup County staff are preparing for heavy rainfall, as current projections place west central Georgia in the path of the system. The storm is expected to weaken as it moves across land, with LaGrange projected to receive heavy rain but less severe winds.

LaGrange Utilities Director Patrick Bowie said the city’s electric crews are at full staff after sending a crew to Louisiana last week. He’s not expecting significant wind damage, but inventory is stocked and ready to go either way.

Bowie said the city has an automated system that notifies them of power outages. The phone lines tend to get overwhelmed, so Bowie asked people not to call unless there is a serious emergency at their home. The utilities department will post updates regularly on Facebook, he said.

If your whole neighborhood loses power, Bowie said the city already knows and is working to fix it. If your home is the only one in the area to lose power, he said to go ahead and call the city.

Troup County Engineer James Emery is not especially worried about the system, apart from road drainage problems, and said his staff were “preparing for the worst and hoping for the best.”

Emery said county road crews have been going around the county looking at areas where there have been historic problems with flooding. They are working to clear out culverts, bridges or ditches that might hinder storm water drainage.

The county is also prepared to set up roadblocks to redirect traffic away from flooded roads, Emery said. Emery asked people to not drive into flooded areas.

Flood-prone areas include those around the Flat Shoals, Long Cane and Yellow Jacket Creeks and their tributaries, Emery said.

“Those properties around West Point Lake and the [Chattahoochee] River are somewhat better off because the [Army] Corps of Engineers is able to manage the lake elevation through the discharges at West Point Dam,” Emery said.

Bowie said storms typically don’t have much impact on water and gas utilities unless a pump or plant loses power. The sewer system, though, will be dealing with high inflow and infiltration if there’s heavy rain.

The city tends to have some problems scattered throughout the sewer system during big storms, Bowie said, but he said the staff is experienced in addressing these, and sewer employees will be on standby.

The amount of water coming into the Long Cane wastewater plant may increase from four or five million gallons of water per day to 20 MGD. But, rainwater tends to dilute pollutants, Bowie said, making it easier to treat.

Check back at lagrangenews.com for updates on Hurricane Sally.