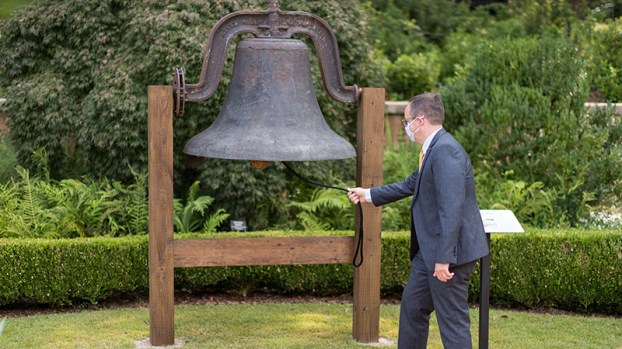 “We are here today to remember two important events in the history of our community,” said Director of Hills and Dales Estate Carlton Wood. “Events that would have a profound impact on the future of the LaGrange and Troup County. There are those who think that remembrances of the past serve no purpose. But I believe what’s the famous astronomer Carl Sagan said, ‘you have to know the past, to understand the present.’”

One hundred twenty years ago, in 1900. Fuller, and a large group of investors started Unity Mill off of Truitt Avenue.

Unity Mill became the first of many cotton mills that helped establish the textile empire in the community.

“As far as I know, this is the first exhibit dedicated exclusively to the story of the Callaway Mill enterprises,” Wood said.

“On this day in 1908, 112 years ago, the directors of Unity Mills publicly announced that they would use over a half a million dollars of profits from Unity to fund a completely new mill called Unity Spinning Mill.”

The new mill opened its doors in 1909 and quickly became part of the growing enterprises of mills in the county and beyond. The mill was sold to Milliken in 1968.

Callaway Foundation President Tripp Penn told the story of Callaway Sr. and how he was a natural born businessman.

“At his core, both as a child and as an adult he was an entrepreneur,” Penn said. “By his 18th birthday, he had started his first business, which was a department store.”

Penn said the theme of Callaway’s life revolved around his faith, family and integrity.

“He showed how much he loved LaGrange,” Penn said. “He had every opportunity to leave the LaGrange, but he chose to make his mark here and do his own thing in his hometown. Now Mr. Callaway was not a perfect man and the times in which he lived are certainly not perfect either, but he did care deeply about his fellow man.”

Callaway made the mills the middle and center of the LaGrange community that included the Mill Village, churches, schools, gardens, parks and more.

“When asked about his mills, he replied … ‘We make American citizens, and we run cotton mills to pay the expenses,’” Penn said. “He clearly also cared deeply about developing the individual. He was passionate about education, particularly the time he invested in his schools, and he was against the standardization of people.”

Callaway chartered the Relief Association in 1917 that served to better the lives of the people who work in the mills. The foundation now supports scholarships that go to local high school students and graduate students

According to Penn, since its inception $65 million worth of scholarships have been given out.

“Because of his generosity, he was often called a philanthropist,” Penn said. “He would reply, ‘philanthropist nothing, I am a business man.’ While he might have scoffed at this title of philanthropist, there are many examples of how generosity was a fundamental part of his character.”

Decades ago, the bell was rung to signify the beginning and ending of a work day.

“As we remember his life and legacy, I think it’s fair to say that Mr. Callaway didn’t just build a textile business, he built a modern city,” Thornton said.

“LaGrange grew from a small market town, whose main draw was a courthouse, to a center of modern industry and transportation because of his progressive vision and entrepreneurial spirit.”

The family of Natalie Jones, who has been missing since July, plans to host an awareness ride that will start... read more