DOWN TO THE WIRE: Local leaders grow more concerned about Census response numbers 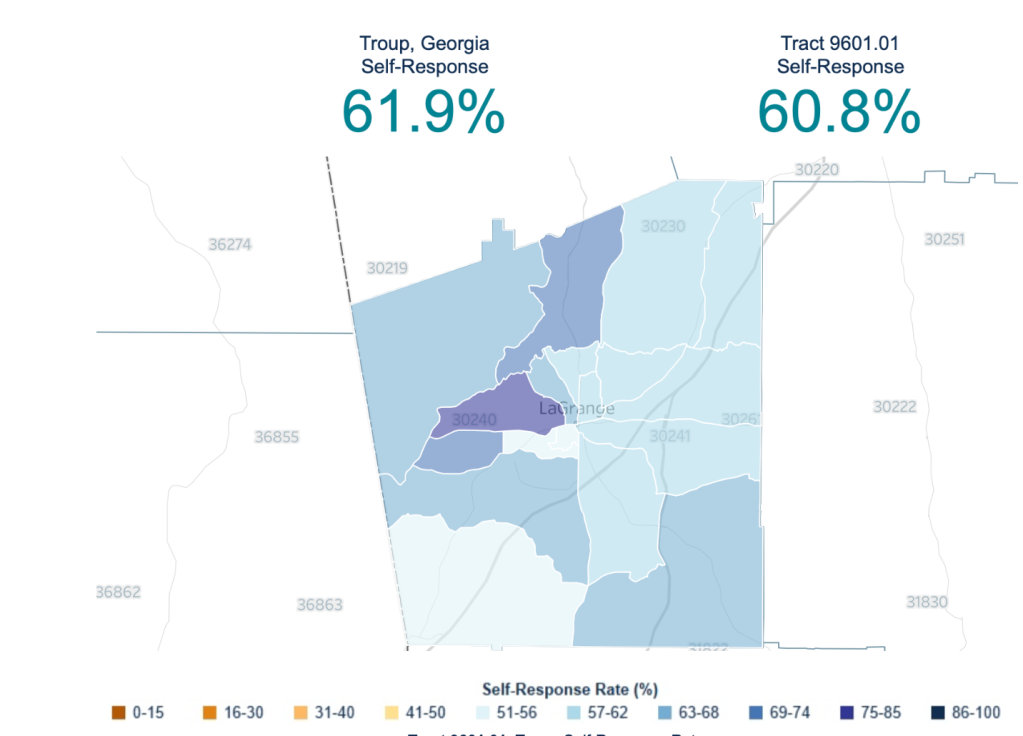 With only seven days left to take the 2020 Census, local leaders are concerned about the response rates.

Troup County, in total, only has a 61.8 percent response rate to the Census.

In LaGrange, 41.1 percent of the population has taken the Census online and the other 17.3 percent has used the mail in method. In total, less than 60 percent of the LaGrange community has taken it.

“I am nervous,” said LaGrange Mayor Jim Thornton. “Georgia as a state is very low right now too, and then inside Georgia, Troup County and LaGrange are very low comparatively. For the next 10 years, this will affect the allocation of state and federal funding, and it will affect our representation at all levels of government.”

The U.S. Census Atlanta Regional Office is expecting Georgia and Troup County to miss out on thousands of dollars from federal funding if more people don’t take the Census.

“I’m very concerned and I would just encourage anybody who has already completed the census, to reach out to their friends and neighbors and encourage them to do so,” Thornton said. “All grants from the state and federal government are tied to population, so that would be real money that would be reduced. Also, our representation in Congress would be reduced.”

The Census only takes place every ten years, therefore there is no going back after the deadline on Sept. 30.

“This is not something we can fix next year,” Thornton said. “We will have to live with it until 2030.”

According to the 2020Census.gov, the results will also determine how hundreds of billions of dollars in federal funding are allocated to more than 100 programs, including Medicaid, Head Start, block grants for community mental health services and the Supplemental Nutrition Assistance Program.

As part of its Nonresponse Follow-up Operation (NRFU), the U.S. Census Bureau is visiting every household that has not already responded to the 2020 Census to ensure a complete and accurate count.

The city of Hogansville is seeing less than a 60 percent response rate with only 57.2 percent of the community responding.

“We’ve put out notices out in the utility bills, we’ve mentioned it every chance we get and the next step is Census workers showing up at their doors,” said Hogansville Mayor Bill Stankiewicz. “It just makes the job more difficult. We had a larger response 10-years-ago.”

Stankiewicz said it will be small towns like Hogansville that will suffer the most.

“We are distributed SPLOST dollars based on population size, and it’ll hurt our share from the piece we get as part of the county,” Stankiewicz said. “Right now, and it’s been this way for a long time, we get five percent, West Point gets five percent, LaGrange gets 45 percent and the county gets 45 percent. If we even lost one percent, it’ll be an astronomical amount of money for the city.”

Those who have not yet completed the 2020 Census can visit my2020census.gov or respond by phone or paper mail with details available at 2020Census.gov.

Local officials are encouraging people to count everyone who lives in their home, including relatives, non-relatives, friends and roommates.

Also, count all children and babies who were born on or before April 1, 2020.