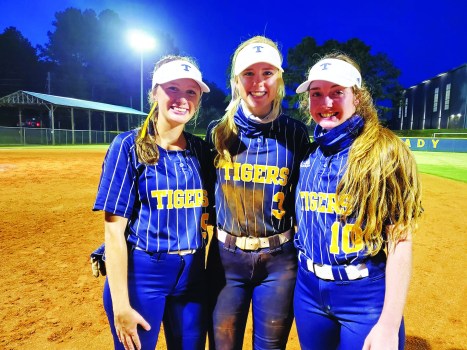 It’s been a struggle at times the past few seasons for the Troup High softball team, but things are looking up this year.

Heading into Thursday’s game against LaGrange, Troup is 7-6 overall, and it has a 3-0 record against Region 2-AAAA opponents.

A trio of seniors have helped Troup enjoy a rebound season, and they’ll be on the field on Thursday afternoon for the showdown against their cross-town rivals.

Among the seniors are Emilee Johnson and Hadleigh Livingston, who have been with the program since they were freshmen, and newcomer Emilie Reed.

“They’ve helped so much,” said Ryan Simpson, Troup’s first-year head coach. “They got right behind me.”

The seniors are hoping to make it to the state playoffs for the first time since 2017 since when they were freshmen.

That team beat Cartersville in a dramatic best-of-three series in the Region 5-AAAA tournament to advance to state.

The Lady Tigers haven’t made it to state the past two seasons, but they appear to have an excellent chance of making it happen this year.

The top four finishers in the Region 2-AAAA tournament will qualify for state, and Troup has beaten its three region opponents by a combined score of 37-4.

“We made it (to state) our freshman year when we beat Cartersville,” said Livingston, who has excelled at shortstop this season. “I think we have a good chance of first or second this year.”

The seniors have had to adjust to a new head coach this season.

Kayla Yeargin, the previous head coach, left following the 2019 season to take a teaching and coaching at McEachern.

Simpson, a Valley (Ala.) native who was a standout pitcher at Point University for four seasons, was hired to take over the Troup softball program.

Emilee Johnson, one of the seniors, said it’s been nice to have someone new come in an offer a fresh point of view.

“I’ve really enjoyed the coaching change,” Johnson said. “It’s refreshing. It’s somebody who’s never been exposed to our program before. It’s really good to have that with the program rather than have somebody we’ve known forever.”

Hadleigh Livingston, a multi-year starter, is happy to be a part of a team that’s having success.

Emilie Reed, an outfielder, has enjoyed her experience being a part of the Troup softball family this year.

“I just moved here, so it’s been great being here,” Reed said. “We work together, we talk. It’s been fun.”

Troup and LaGrange will be playing for the third time this season, although the previous two meetings didn’t count toward the region standings.

On Aug. 8 in the Callaway Classic, Troup lost to LaGrange 5-0.

Troup enjoyed a lot more offensive success in the rematch, but it was LaGrange securing the 15-6 win to improve to 2-0 in the season series.

Catherine Smalley, Troup’s talented freshman, hit a home run a double while driving in four runs in the second game.

Troup followed up that second loss to LaGrange by winning five of its next seven games, including its region games against Columbus, Shaw and Carver.

LaGrange, meanwhile, has been riding high of late, winning four straight games to improve to 13-6, and it is 4-0 in the region.

All of the players who helped LaGrange make it to Columbus are back, including seniors Camden Smith, Abby Vanhoose, Malone Aldridge, Madison Dennis, Kirsten Williams and Jacee Marable.

LaGrange, like Troup, has yet to be tested by a region opponent.

LaGrange has outscored its four region opponents by a combined score of 53-2.

LaGrange and Troup both have two region games remaining in the regular season, and they’ll likely be the top two seeds in the region tournament. 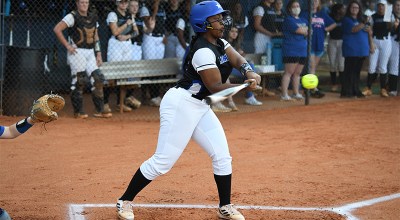