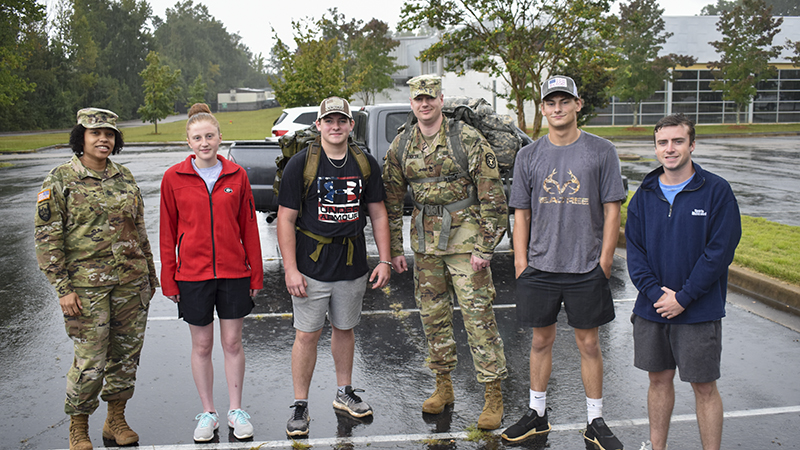 Amid an early evening downpour, 10 people came out to participate in a ruck march hosted by the U.S. Army Recruiting Station in LaGrange.

A ruck march is a walk or jog with a weighted bag. There was no mandatory distance or time limit, and participants were asked to bring a backpack of their choice.

Candler explained that his office only opened in January, though there had previously been a recruiting office in LaGrange that closed. With COVID restrictions in effect since March, Candler’s office hasn’t been able to conduct as much traditional recruiting, such as visits to high schools and sporting events.

“There hasn’t been a recruiter presence in LaGrange in a couple of years,” Candler said.

The closest recruiting office before January was in Newnan.

However, the ruck event, he said, was primarily meant to increase the office’s visibility, not necessarily serve as a recruiting effort.

“It’s a good training event for [new recruits]. And it gets some people in the community involved with each other, just in a safe environment,” Candler said.

“It allows us, because we’re brand new to the area, to actually meet people from the community.”

Candler hopes to make the ruck a monthly event, occurring on the last Thursday of each month. He’s created a Facebook group, “LaGrange Walk/Run/Ruck.” He stressed that this too, was simply a running group, and participation doesn’t carry any expectations of joining the army.

“A lot of people, they just don’t want to do certain things because they don’t want to be alone doing it. And I used to be the same way,” Candler said.

“It gives them an opportunity to have somebody encourage them and help them along with their fitness goals, in just, an encouraging, welcoming environment.”

The entire southeast is a “hotspot” for recruiting, Candler said.