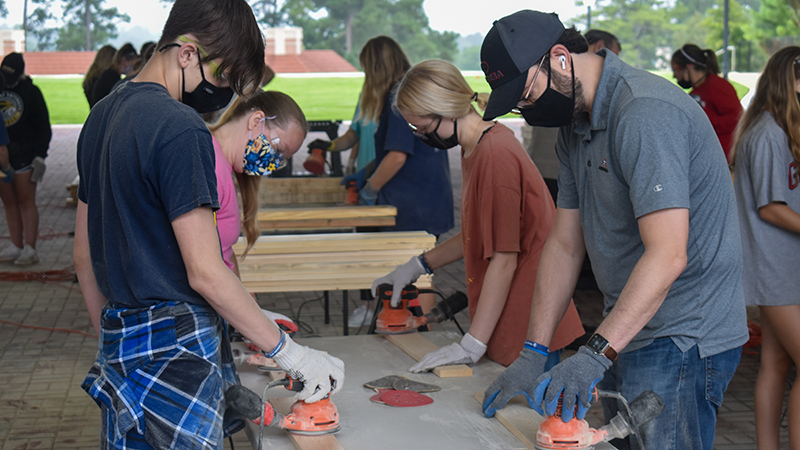 Sweetland Ampitheatre was buzzing with the sounds of power tools Saturday morning. About 100 masked volunteers worked on an assembly line, drilling holes, sawing and sanding lumber, staining headboards and using branding irons to burn “SHP” onto pieces of wood.

The event was organized by the LaGrange Chapter of Sleep in Heavenly Peace, which built 50 beds as a part of SHP’s “Bunks Across America” build day.

SHP is a nationwide nonprofit that provides beds and bedding to children in need. This was the second annual Bunks Across America build day, with 108 chapters participating.

According to Greg Watts, president of the LaGrange chapter of SHP, there was a good turnout, considering the pandemic.

“We really didn’t know how people would respond,” Watts said. “But we promoted the mask and the hand sanitizer and distancing and all that to try to make everybody feel as safe as possible.”

Last year, the chapter built 200 beds, but there were more than twice as many volunteers, Watts said. Watts explained that the building is supervised by “core team” members who are experienced in the builds. Among the other volunteers were local high schoolers, the Junior Service League members and church groups.

“I think the thing that surprises people is there’s such a need here in the community. … I mean, if we had 100 beds right now, when we opened up the application project, they’d be gone in 45 days,” Watts said.

SHP shut down operations in March. Watts said they wanted to wait until school started before trying to host a build.  When they stopped, the chapter had built and given away more than 700 beds, while about 80 children were on the waiting list.

All of the chapter’s equipment can be packed up in a trailer. This is the second year they’ve used Sweetland, but smaller builds have taken place at churches and businesses. Some companies do builds as team-building exercises, Watts said.

Just about all the money the chapter has is spent on supplies, he said. Lumber for the builds is purchased or donated locally and used to build the beds by hand. SHP has a partnership with Lucid mattresses that allows them to get deals on bedding.

“We’re 100% self-funded, here locally. This all comes from churches and individuals and businesses,” Watts said.

Watts also pointed out that families benefit from participating.

“Parents can bring their children, and they can learn some skills, learn to use a drill or whatever it is around wood, and be helpful as a group,” Watts said.

Watts said SHP can always use more donations. Those who need a bed for their child can apply at https://www.shpbeds.org/.

“The thing with children is they don’t have a choice, right? They can’t go somewhere else and go buy furniture and things. So, we’re just trying to put them in a safe place to go to sleep,” Watts said.