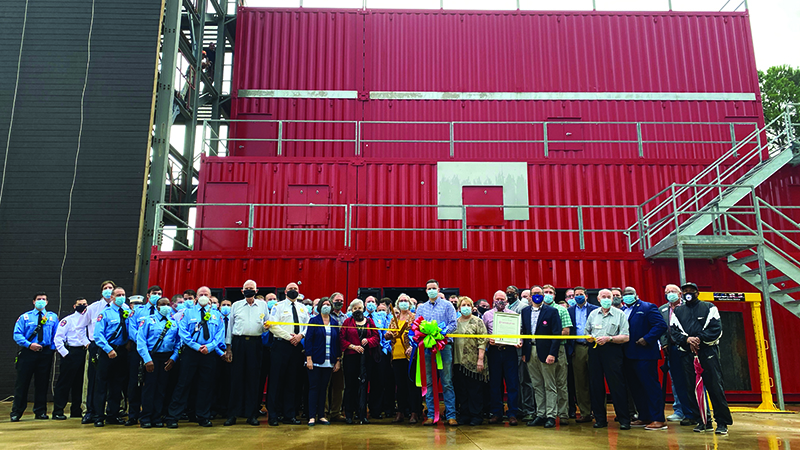 As the rain came down Tuesday morning, so did the emotions as the LaGrange Fire Department and the wife of the late Deputy Chief Ray Stewart officially presented the Raymond L. Stewart Fire Training Center to the community.

“Ray was hired on at the LaGrange Fire Department as a ‘I can do anything, want to be superhero,’” said Ray’s wife, Lynn Stewart. “Not knowing that the one thing that would make him a real hero was training.”

Ray began his career in 1979 and by 1984 was promoted to training officer/lieutenant, and again in 1988 to captain of the training division. He was then promoted to deputy chief of the training division in 1990, assumed the duties as administrative deputy chief two years later, and finally became the deputy chief of battalion 2 (suppression) in 1999. He was the co-recipient of Unit Citation of Valor Award in January 1988; and also, the recipient of the Command Award in 2005. Ray held numerous other certifications and accomplishments through the LaGrange Fire Department, the Georgia Fire Academy and the Georgia Firefighters Standards and Training Council.

LFD Chief John Brant said that the training programs and techniques that Ray created in the 90s are still being used today at LFD.

“Ray was instrumental in the training of the department,” Brant said. “He was a trend setter and an innovator.”

Brant said it is an honor to have the training center named after Ray.

“This is a special moment for each of us,” Brant said. “I hope you understand the importance to have a training center that you have behind you today. This is something that is going to train you, education you for your whole career for generations to come.”

Brant said that when someone calls 911, they don’t get to choose which firefighter is sent.

“When you sign on to LaGrange Fire Department, you owe it to every citizen to be well prepared,” Brant said to the firefighters. “We train each and every day to make sure when we get on the scene, we are able to help that person with whatever they need. This facility is going to help us do that.”

Ray was leaving to report to duty when he suffered an aneurysm that took his life on Sunday, Nov. 21, 2010.

“His life was cut short,” Brant said. “We lost a great leader, manager, mentor and friend from our lives. He has been gone almost 10 years now but for sure he has not been forgotten. His legacy lives on through us and through the stories we tell about him and believe me, we’ve got a bunch of them.”

The new state-of-the-art facility was possible through SPLOST dollars and a $500,000 donation from the Callaway Foundation.

“I know Ray is looking down today and is very proud of his legacy and grateful for each person being here today,” Brant said.

Thornton said one thing LaGrange always does well is come together as a community to help provide resources.

The LFD also maintains an ISO 2 insurance rating, which 0oaces LFD in the top 5 percent of fire departments nationwide and reduces insurance premiums for residents.

“Being a firefighter is a hard, hard job,” Stewart said. “Any position in the fire service is challenging. Training for a specific job is tough, but training to be an instructor is tougher.”

Stewart said that as an instructor trainer Ray was responsible for the actions of all the trainees.

“Training became his passion,” Stewart said. “Ray was responsible for the training of the fire fighters that responded to my 911 call on Nov. 21, 2010. I have never seen two first responders work so hard toward the goal of zero percent loss of life. Their actions that day are a testament to their training. Unfortunately, that day, that event, circumstances were beyond anyone’s control.”

Stewart said Ray would be proud of the training center but not because his name was on it.

“But because of the vital need it provides,” Stewart said. “I trust my life with any of these firefighters. I hope that if ever I’m in a catastrophic event, it will be here near home in LaGrange. I know that the chances of survival would be increased exponentially because of the training provided by the LaGrange Fire Department.”