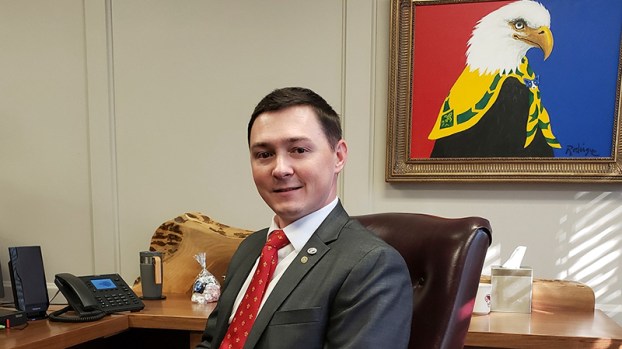 Above, Chris Largent, a district executive for the Boy Scouts district that covers LaGrange, is leaving his role after 18 months.

“There’s a small staff, and I [will] be in charge of daily activities and working with the budgets, and promoting and donor cultivation, things like that,” Largent said.

Largent was in his role as district executive for 18 months, having started in January 2019. The Yellow Jacket District covers Troup, Heard and Meriwether Counties, as part of the Chattahoochee Council of the BSA.

Leaving Boy Scouts was a tough decision, Largent said, especially because, as a fan of LaGrange, he will have to move to Columbus.

“One of the best enjoyments that I got out of working for the Chattahoochee Council in the LaGrange area was being able to go and excite kids about joining our program,” Largent said. “Seeing the excitement on these little kids faces, telling them about our program, that was just heartwarming to me.”

Another meaningful aspect of his work with the BSA was serving on Eagle Scout review boards and seeing teenagers work hard to complete their eagle projects.

“It shows their dedication to a greater purpose than themselves,” Largent said, adding that the project teaches kids about fundraising, project planning, leadership and community service.

The new position fits well within Largent’s career, both before and during his scouting work.

“When I owned a store in Columbus, we led cleanup efforts, we tried to do monthly river cleanups and participated heavily in Help the Hooch and all types of things like that, trying to leave the place better than we found it,” Largent said.

“And, that was taught and, basically, it was a culture that I developed in the scouts.”

During his tenure at the BSA, Largent oversaw the establishment of a female scouting unit as part of the BSA’s introduction of girls into the program. On Thursday, Largent will be part of a board of review for one of the first female eagle scouts.

“We weren’t sure how exactly it was going to be perceived by the kids, by the parents of kids, and by the community, but that particular unit has really excelled,” Largent said.

COVID-19 presented its own challenges for the BSA, but Largent said a silver lining was kids having the time and online resources to complete requirements and merit badges.

“They’re able to participate in things at a quicker rate than what they would have if everything would have been in person,” Largent said.

Largent starts at the conservancy Oct. 5. He will still remain involved in scouting, and asked for the community to continue to believe in and support scouting as it navigates a difficult period — the BSA declared bankruptcy in February due to financial instability caused by sexual abuse lawsuits.

“I still believe in scouting and I still believe in the volunteers and the youth in those communities. And I want to see them succeed and have the opportunities that I had as a scout growing up,” Largent said.

“Scouting has has gone through a lot this year … but we need to support locally to show others that scouting is alive scouting is still viable and is still a benefit to any community.”

Hillside organizations team up for event