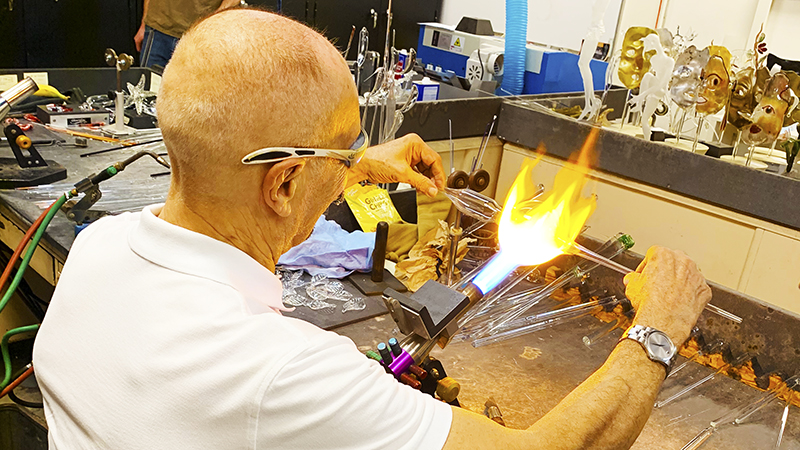 No matter the weather in November, visitors to the LaGrange Art Museum are guaranteed to see snowflakes.

A gallery full of glass sculpted snowflakes, that is.

The art museum announced Wednesday that the snowflakes will be featured in an exhibition of the glass art of Atlanta’s internationally renowned Frabel Studio from Nov. 20, 2020, until Jan. 9, 2021.

Botanicals and whimsical figures will also be displayed.

Since the studio’s establishment in 1968, its founder Hans Godo Frabel has created brilliant glass art forms.

“I have wanted this exhibition for years, and it is finally going to happen. Frabel is recognized as the founding father of modern torch work in the world of art,” said Al Brannon, LaGrange Art Museum board president.

Brannon said he attended church in Atlanta with Frabel.

“This crowd-pleasing exhibition is for visitors of all ages and the perfect outing when entertaining holiday guests,” said Laura Jennings, executive director of the LaGrange Art Museum.

Jennings said that the staff has been able to visit Frable’s studio and see him work in action.

“We went to his studio and viewed his works,” Jennings said. “We watched him blow a vase for us. We have gotten to see how he works, and it’s all very interesting.”

The opening reception is set for Friday, Nov. 20 at 7 p.m. and a gallery talk will be scheduled.

Frabel’s snowflake ornaments, mini botanicals, candlesticks, books and many more studio pieces will be available for purchase in the pop-up gift shop.

According to Jennings, Frabel was born in Jena, East Germany in 1941. The tumultuous political climate in existence after World War II necessitated a family migration to West Germany.

Frabel studied scientific glassblowing at Jena Glaswerke and took art classes at the Mainzer Kunstschule in Mainz, Germany. In the artist’s spare time, he focused on his real passion, art, and attended art classes to learn how to paint and draw.

In 1965, he moved to Atlanta where he worked at the Georgia Institute of Technology in its scientific glass blowing laboratory. During this time, Frabel continued his studies of glass as an art form at Emory University and Georgia State. While working at Georgia Tech, Frabel created crystal glass sculptures as gifts for friends, partners and business associates, inspiring him to become a full-time artist.

Over the next 52 years, he has followed the European tradition of apprentice and master. As the master artist, he passed his skills on to a handpicked group of apprentices and associates, who, after many years of training, became master artists in their own right.

Among those who own a piece of Frabel art are Queen Elizabeth II, Sir Elton John, Jeff Foxworthy, Prince Charles, Jimmy Carter, Barack Obama, Margaret Thatcher and Michael Douglas. Frabel art pieces can be found in art museums around the world, including London, Paris, Tokyo, New York and Washington D.C.

Frabel’s delicate and innovative sculptural compositions begin with heated borosilicate rods that are shaped with a hot lamp or by hand.

His subjects, often rendered at life-size scale, include the human figure, flora and fauna, tools and even water droplets.

Jennings said the snowflakes look just like snowflakes., and there will be more than 200 of them in the exhibit.

“Each year, he makes a featured snow flake as well,” Jennings said. “This is a great way to kick of the holiday season in our community.”

The LaGrange art museum is located at 112 Lafayette Pkwy in LaGrange and is back open to the public Tuesday through Friday 9 a.m. to 5 p.m. and Saturdays from 1 p.m. to 4 p.m.