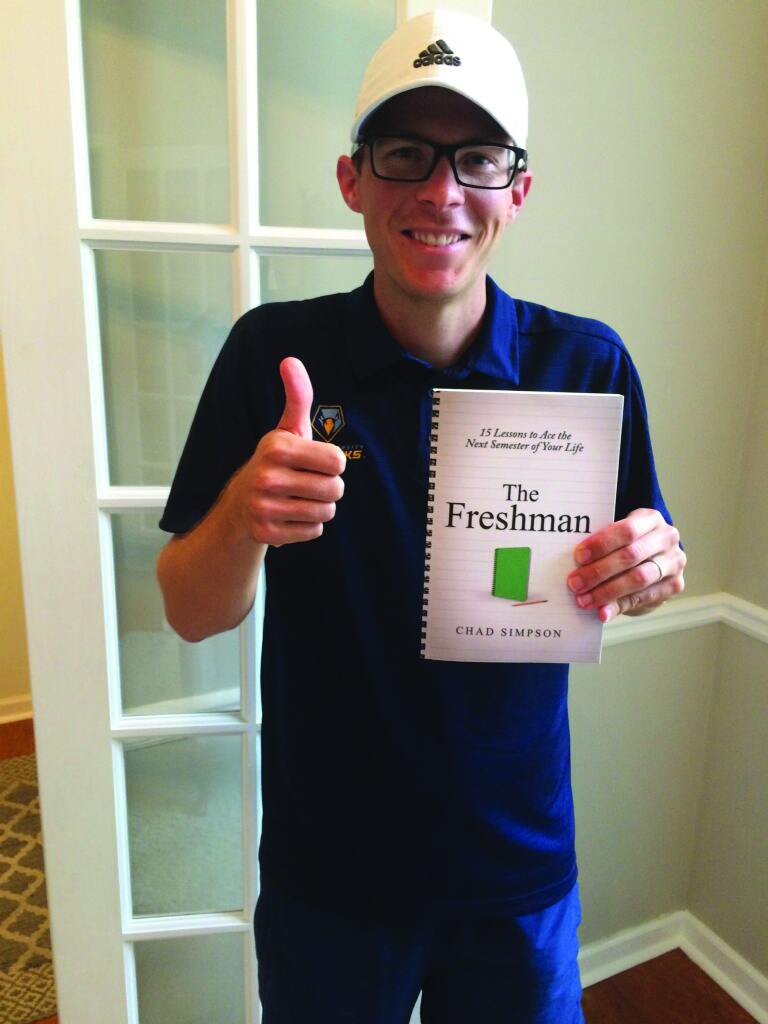 Across the country each year, millions of students enroll in a college or university for the first time, many of which are 18-years-old.

w As a former student-athlete and current Point University tennis coach, Chad Simpson knows the difficulties and expectations of that initial semester on campus.

After a couple of his players received bad marks on their transcripts during their first semester, Simpson decided to find a way to help not just his athletes but students across the country.

“I just felt responsible as their coach, and I was just trying to think how I could help them be a better success that first semester academically, socially and spiritually,” Simpson said. “I had this idea that I could write a book to connect with college kids, and it could help them learn these lessons and have success.”

Through this thought process, Simpson wrote “The Freshman:15 Lessons to Ace the Next Semester of Your Life.”

The 104-page book follows Chris, who walked on at a small Division II basketball team halfway across the country from his parents. Chris needed to make an impact in his freshman year, so he could earn a scholarship to continue to go to college since his parents could only afford to pay for his freshman year.

To start the year, Chris is competing with his roommate and four other freshmen and starts to fall behind.

At the same time, his girlfriend, who is still in high school, decides to take a break from the relationship. Nothing seems to be going right early in his first semester of college for Chris.

While many freshmen do not have every problem that Chris experiences in the book, every college freshman experiences some type of problem in their first semester and year of college. At 18-years-old, a freshman is expected to function on their own for the first time while in a new environment.

The book helps freshmen learn the importance of finding the right circle of people to surround themselves with and learn how to deal with their priorities.

“They are pretty simple, practical lessons that are taught in the book,” Simpson said.

While the book was originally intended to help freshmen adjust to college, the book has been able to help people from all ages, since people go through a freshman year every time they get to a new experience in their life, like a new job, retirement, getting married, etc.

“The book is about a college guy playing sports, but I’ve heard from a 45-year-old neighbor that the book is speaking to him,” Simpson said. “The lessons are applicable to every age of our lives. Even with COVID-19, we’re all in a freshman year, just learning new ways. I intended to write the book to help freshmen in college, but after I finished it, I realized that it was speaking to me and helping me with lessons at 32.”

In the book’s prologue, Simpson talks about the four freshmen years he’s experienced in his life: his freshman year at Liberty, his marriage, his first job and when he became a college coach.

Simpson had the idea to write the book during his fourth year at Point University. After sitting on the idea for six months, he decided to sit down and put together a story.

The actual writing of the book took him roughly a month to write the actual story, writing four to six hours a day during that time.

The editing process took about a year since he didn’t have time to sit down and refine everything like he did when he wrote the actual story.

On Aug. 12, “The Freshman: 15 Lessons to Ace the Next Semester of Your Life” was published.

“It’s humbling. To know that God put this story on my heart, I just had to be faithful to work and put in the time to make it happen,” Simpson said. “It’s been a crazy feeling and a blessing to see people be impacted by it and make positive changes in their lives. That’s why I wrote it. If one person could be impacted for eternity by reading this book, then it’s worth it. I believe God can speak in different ways.”

The book has been endorsed by several college coaches from around the country, many of which have had success as both a player and a coach.

“The Freshman: 15 Lessons to Ace the Next Semester of Your Life” can be found on Amazon.