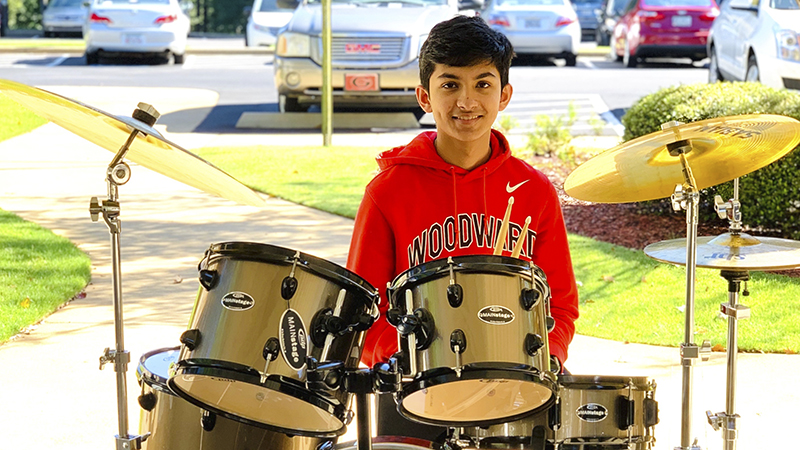 Above, Krish Kadam, a 15-year-old from Newnan, Georgia, poses with his drum set.

Most 15-year-olds spend their Saturdays hanging out with friends, watching sports or just being teenagers.

On Saturday, 15-year-old Krish Kadam volunteered his time to play his drum set for the residents at Vernon Woods Retirement Community.

“I just wanted to something nice for the elderly,” Kadam said. “My mom is a physician and has a lot of her patients there and has told me stories on how they haven’t been able to do much. They’ve all been kind of depressed and their life hasn’t been eventful.”

Kadam said he thought it would be a good idea to play a few oldies for the residents.

He played Eye of Tiger, Living on a Prayer and YYZ.

“I just thought it would be a great idea to entertain them,” Kadam said. “I wanted to play older songs because I knew they would recognize them and make them happy.”

A few residents were able to sit out front and listen, but Kadam’s drums were loud enough that most residents sat on their front balcony and watched the performance.

“I haven’t been able to perform in a while because of COVID so this was nice to perform again,” Kadam said. “This is my first time performing something like this.”

Kadam said he would like to play for them again in the future.

“I play percussion in my band at school,” Kadam said. “I am going to look into trying to play again for them. It felt good to play for all the residents.”