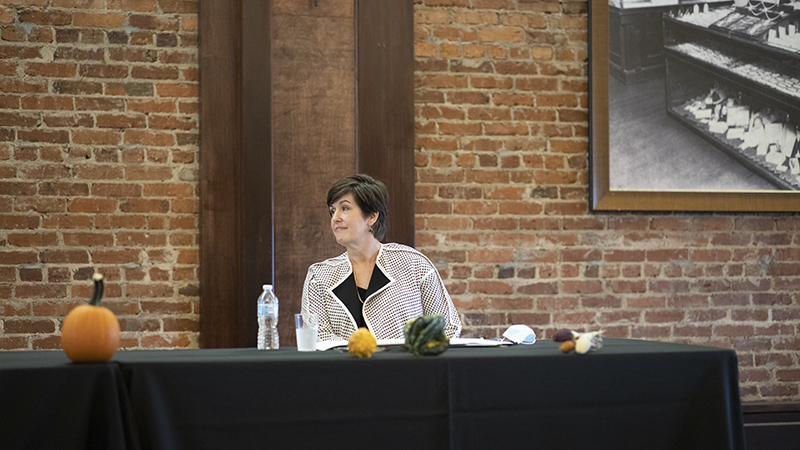 On Monday, members of the philanthropic community and other local organizations got to hear from three non-profits who play a role in the LaGrange-Troup County community.

The Callaway Foundation, United Way and Community Foundation of the Chattahoochee Valley all gave updates on what the past year has looked like and what the future could hold.

In 2005, the Community Foundation of Troup County reorganized its board with an emphasis on broad community leadership.  Later that year, the organization became an affiliate of CFCV to provide staff support, development and investment expertise and economy of scale.

“Our mission is to enable and promote philanthropy,” said CFCV CEO and President Betsy Covington. “Think of us as an umbrella organization with lots of different funds underneath that umbrella. We have several funds that support LaGrange Symphony, LaGrange Academy and places like that. We also have a lot of donor advised funds that families here have set up to preserve their family’s legacy sometimes for generations.”

In the past year, Covington said CFCV has given out $16 million in donations.

Covington said in Troup County CFCV has 29 funds that have created an asset of $7.2 million.

When the pandemic first hit, United Way President Patty Youngblood reached out to all the 25 agencies that the United Way funds.

Toward the end of March, Youngblood met with Callaway Foundation President Tripp Penn and Covington about an emergency fund.

From that, they created the Troup County Emergency Relief Fund.

“I am more than proud to tell you that we have raised $160,000,” Youngblood said. “We had a $50,000 match from the Callaway Foundation. I received an email in July that we would be receiving a $20,000 grant from United Way Worldwide because of what we were doing here.”

The fund has been able to create grants in the total amount of $93,300 that went to local organizations in Troup County during the pandemic.

“We tried to keep those grants, relatively small. We wanted to address immediate needs,” Youngblood said. “We didn’t want to address something that might happen in six months because in six months we all might be up and running at normal speed again.”

Youngblood said they tried to keep the grants under $10,000, with the exception of the grant they gave the school system.

A $20,000 grant was given to the Troup County School System to use on PPE, hand sanitizer and more for all teachers and staff to have ready on hand for when school started in August.

“The money from United Way stays in our community,” Youngblood said. “One penny of every dollar goes United Way Worldwide, and the rest of it stays here.”

Due to COVID-19, Penn said they have given out more donations than usual this year.

“We had to shift and have additional dollars to support food insecurity, medical needs and housing,” Penn said. “The second thing is we have had to be more proactive. Normally, we kind of wait for you guys to come to us, and we were reaching out to some organizations to say, we know you have needs. We know you’re overwhelmed. How can we help?”

Penn noted that the foundation has been more flexible these past few months with grants.

Penn said in the past they would consider grant requests every quarter.

“That’s one of the reasons we created the relief fund because it was weekly considerations,” Penn said. “Organizations only had to wait one week, not only to be considered but to receive their check.”

Penn said the Callaway Foundation reached out to the hospital and other local agencies to find out who was being most affected by the pandemic.

“It hasn’t affected everybody equal,” Penn said. “Before, some of the challenges were racial equity and some other things that we knew were issues got worse and clearer during the pandemic.”

Penn said they are working on a new strategic plan to focus on housing and education.

“We want to make sure every child in Troup County has a great opportunity for education,” Penn said. “We want to make sure that same child, who might not have gotten some of the opportunities as other kids, we want to make sure he or she gets to live in a safe neighborhood and live in a house that is stable and safe. One of our next steps will be to kind of look at doing a comprehensive community assessment. We’ll be developing really specific goals and success metrics to help guide our path.”