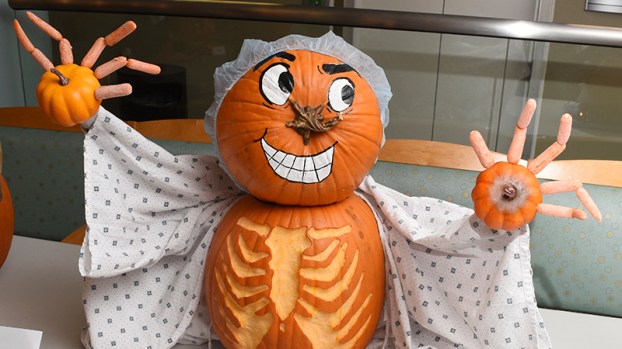 No matter what happens, Halloween in LaGrange will be different this year. While it’s up to individuals whether they want to participate in trick-or-treating or host cookouts, some mainstays of the holiday are uncertain due to the pandemic.

One event that is planned to occur, however, is trick-or-treating at Hills and Dales estate. For years, the estate has passed out full-sized candy bars to costumed children.

The event will be Oct. 31, Halloween night, 5:30 to 8 p.m. It will be at the estate’s Porte Chochère, which will feature ghost-inspired decorations. The event is free to the community.

Hills and Dales Communications Manager Christy Gresley said that typically about 800 candy bars are passed out.

“I think the community looks forward to it every year,” Gresley said. “It’s just been a longstanding tradition that the community enjoys.”

The event is totally outdoors only, with social distancing and masks encouraged.

Bellevue, another historic site that usually hosts trick-or-treating, has tentatively cancelled this year’s event, though that may change.

Valerie Cardwell is president of the LaGrange Women’s Club, which owns and manages the mansion. She said the club was “devastated” to cancel the event.

“We had tentatively cancelled it because we thought … it wouldn’t be a good thing to have a crowd of people coming,” Cardwell said.

After hearing that Hills and Dales was moving forward with their plans, however, Cardwell said she was reconsidering the decision.

“I hate to not do that if Callaway are,” she said (the Callaway Foundation operates Hills and Dales). “We just didn’t think that anybody was going to do anything.”

Cardwell said she would announce any changes to Bellevue’s plans.

For 29 years, Downtown LaGrange has hosted an annual Chili cook-off, along with kid-friendly activities such as a costume contest and trick-or-treating.

Barbie Watts, director of promotions and marketing for Downtown LaGrange, said they would not host a chili cook-off or downtown trick-or-treating event this year. Some downtown businesses, however, will “keep the … tradition going” by distributing candy to children in costumes during the afternoon of Halloween from 1 to 4 p.m.

Watts also highlighted Ghostly Walking Tours that Legacy Museum will host on Oct. 29 and 30. Tickets are $15 for adults and $12 for students and Historical Society members.

Other events scheduled for Halloween night include a drive-thru carnival at Western Heights Baptist Church, which, according to the church, will have games played from your car, along with popcorn, snow cones and chances to win candy.

GetFed, Inc., a charitable organization that feeds the community, is hosting a “Spooktacular” event Halloween night from 6 to 8 p.m. that requires attendees to donate a canned food good for entry.

The Centers for Disease Control and Prevention has issued guidelines for celebrating Halloween safely.

According to the CDC, low-risk activities include carving a pumpkin, decorating your home, creating a Halloween-themed scavenger hunt for kids, having a virtual costume contest or having a movie night with family.

So is “trunk-or-treating,” where people pass out candy from car trunks in parking lots, crowded indoor parties, indoor haunted houses where people are crowded and screaming and going on hayrides or tractor rides with people outside your household.

Katie Van Schoor, marketing and communications manager for the City of LaGrange, said the city does not make any ruling over whether certain holidays are canceled or not. She did say, however, that the city recommends people restrain from holding large gatherings, follow CDC guidelines and generally celebrate in a safe and smart way.

The Troup County Board of Commissioners approved an agreement Tuesday with the City of Hogansville that will enable the creation... read more