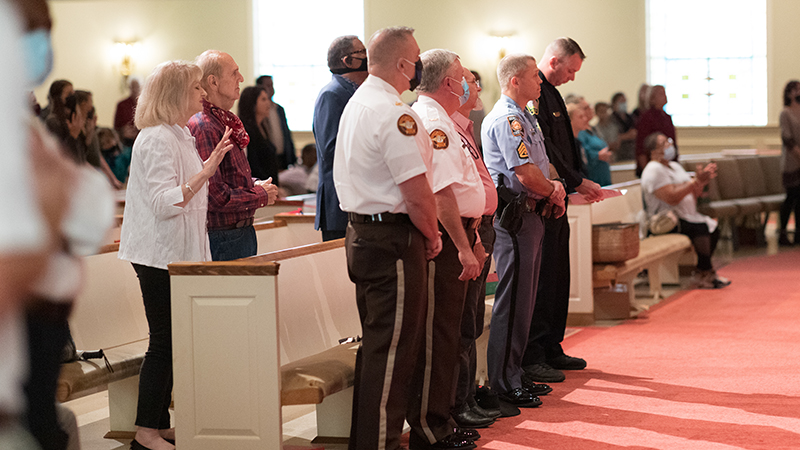 The purpose of the National Faith & Blue event is to create safer, more inclusive communities by connecting law enforcement officers and residents they protect and serve through houses of worship.

“In LaGrange and Troup County, we are one untied community,” said LaGrange Mayor Jim Thornton. “We are coming together to demonstrate that. I appreciate your leadership because here’s the thing: These conditions play out in lots of different levels but today we’re saying, they’re not going to play out in LaGrange and Troup County. We will loudly proclaim that Black lives matter because they do. And we will loudly proclaim that we back to the blue because we as a community are all connected.”

Thornton said one thing the community can agree on is that everyone wants to live their lives in peace.

“We have each other and we have the law enforcement community to thank for our ability to do that,” Thornton said. “I am so grateful on a day like this to live in LaGrange and Troup County and to look out on this diverse crowd and see that other people share this fundamental belief. Now it’s our job to carry that out into the streets. To not leave it in the church sanctuary.”

Across the nation, communities have seen conflict between police and locals, but LaGrange Police Chief Lou Dekmar said that isn’t reflecting in LaGrange.

“In other cities and states across the nation, they’re throwing rocks and bottles at police officers,” Dekmar said. “Here in LaGrange, they’re throwing calories at us. A day doesn’t go by that somebody doesn’t bring something to eat by the police department. That’s because of the sense of community that you see here today.”

The LaGrange Police Department has police has more than 70 different partnerships with nonprofits, churches and other government agencies. Dekmar said their most significant partnership is with the faith community.

“To all the men and women that are here, the preachers that are here and the brave prayer warriors that are here, we want to say thank you,” Woodruff said. “You know I was reminded the other day that the time we are in right now, where it seems like everything is upside down, of 2 Chronicles 7:14 where the Lord has some words for us.”

Woodruff quoted the bible verse which says, “If my people, who are called by my name, will humble themselves and pray and seek my face and turn from their wicked ways, then I will hear from heaven, and I will forgive their sin and will heal their land.”

“Let’s use this time to come together, unite and to get to know each other,” Jeter said.

Ben Turner, who previously was a Georgia State Trooper and is now a minister, said it was one arrest that turned him to ministry.

Turner arrested a 17-year-old high school linebacker that had college prospects for marijuana after a routine road check.

“When I got him to jail that night I told him, which was common practice of mine, that this was a mere mistake,” Turner said. “It did not identify who he was … I went home and told my wife that we had to get in front of the blue lights. We need to start ministering to these people that are lost in our societies before the blue lights are on because at that point the heart is not opened to be ministered.”

Turner quoted Romans 13:1 that says, “Let every person be subject to the governing authorities. For there is no authority except from God, and those that exist have been instituted by God.”

“It’s very important that we recognize that law enforcement in our community stand to hold a position that is not a coveted position and that is the one that stands between good and evil so that we have the freedoms that our country has for us,” Turner said. “That’s why we went into chaplaincy work with the law enforcement aspect of things because I believe with all my heart that if our law enforcement agencies begin to crumble then so will our society.”

Amongst other speakers were the Rev. Pete Shoger and the Rev. Michael Jackson. They both spoke on unity and coming together to walk in prayer with one another.