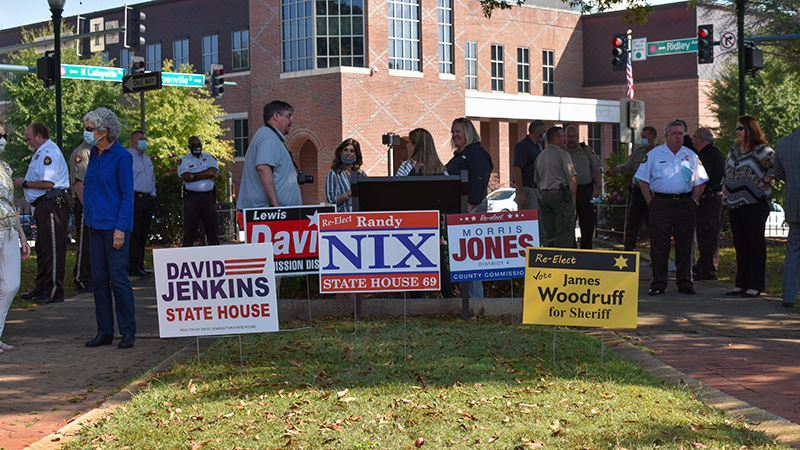 A who’s who of local elected Republicans gathered in Lafayette Square Thursday to rally party activists ahead of the Nov. 3 election.

The first candidate to speak, U.S. Rep. Drew Ferguson, said this election was important “because what we’re seeing is a push toward socialism.”

Democrat Joe Biden currently leads in most national polls, and polls in several key swing states show the Democrat leading or tied with the President. Despite that, Ferguson said he believes Republicans will hold onto the White House and the two U.S. Senate seats in Georgia.

“As I travel around the country, what you’re seeing on the news and the media — I don’t believe it,” Ferguson said. “I see the enthusiasm for President Trump.”

Ferguson said David Jenkins, who is looking to unseat Trammell in the competitive state House District 132 race, has “gone up against the machine.”

Jenkins said the COVID-19 crisis would pass and that he looked forward to working with other local Republicans in Atlanta.

State Sen. Randy Robertson, on the other hand, went on the attack against Trammell and his “Democratic minions.”

“He runs that group over there, and I cannot work with him,” Robertson said. “He will not vote for common sense.”

Robertson is running for reelection unopposed.

LaGrange Mayor Jim Thornton, who arrived late due to a meeting, was invited on stage to give an impromptu speech. Thornton said the city had a positive working relationship with the county, local state representatives and state senators, as well as with the other cities of Troup County.

“All of these gentlemen have your best interest at heart … and I know that David [Jenkins] is going to work well as part of this team also,” Thornton said.

Republican Troup County Sheriff James Woodruff, who has a Democratic opponent in Ricky Ward, took the stage to ask people to tell their friends to vote and not be complacent.

“The stupidest thing anybody could ever do would be to defund law enforcement,” Woodruff said. “Who would you call when it got rough at your house?”

Nix may have an easy path toward reelection, but he reminded attendees that Republicans would need to turn out in big numbers and vote straight tickets to preserve the GOP’s dominance in the state government. Nix said a GOP-controlled Georgia would continue the growth and development the state has seen over the past decade.

“Georgia has been the number one state to do business for the last seven years in a row,” Nix said. “Now, the Democrats don’t want you to remember that, they want you to think about today and COVID, lie the whole world is just today … we’re going to come out of it better.”