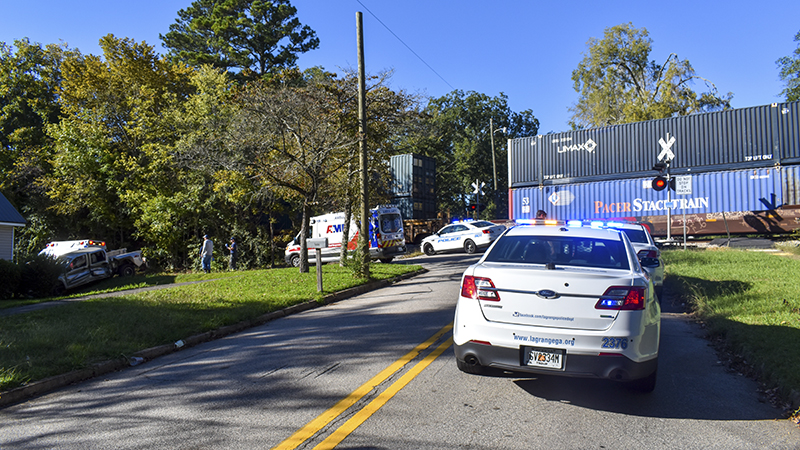 Records show a railroad crossing on Park Avenue has had four accidents over the past year, including one earlier this month where a Chevrolet pickup was hit by a CSX train. The Georgia Department of Transportation is seeking authorization for a project at the site in fiscal year 2021, a GDOT spokesperson confirmed recently.

The most recent accident occurred on Friday, Oct. 2. According to a LaGrange Police Department report from that incident, the driver told police he was driving down Park Avenue and went over the tracks as the train arrived. According to the report, the driver didn’t hear or see the train until he was already crossing the tracks.

The driver, a 23-year-old man, was bleeding from the head when police arrived, but refused to be taken to the hospital, per the report.

The truck had significant damage and had to be towed, while the train had “minor damage to the front where there were scrapes and a power box that was on the front of the train was missing,” the police report reads.

The train was forced to stop at the scene for at least an hour, blocking traffic.

According to the report, the conductor spoke with police, saying he had blown the train’s whistle prior to crossing the road, which a nearby resident corroborated. The driver was issued a citation for failure to yield at a railroad crossing.

Accident reports and inventory reports from the U.S. Department of Transportation’s Federal Railroad Administration (FRA) show that the Oct. 2 incident was the fourth at that crossing in a decade.

According to FRA Office of Safety Analysis records, there are 61 public at grade railroad crossings in LaGrange. At grade means the road and tracks are on the same level, so it does not include roads that intersect tracks by going under or over the railroad, such as with bridges or tunnels.

Records show the Park Avenue crossing has been particularly prone to accidents over the past decade, as no other public at grade crossing in LaGrange has had more than one accident since 2010.

Three accident reports are available for the Park Avenue crossing since 2010 — the Oct. 2 accident is not yet in the FRA database.

GDOT spokesperson Natalie Dale said the department has a project on the books to be authorized for the crossing that would upgrade its active warning devices – namely a gates, lights and bells upgrade.

The Georgia Department of Transportation’s Railroad Safety Unit is responsible for identifying, reducing and eliminating hazards at at-grade crossings in Georgia, according to GDOT’s website.

As of press time, Dale did not respond to further questions about the project’s funding, timeline and impetus.

“No entity, public or private, is precluded from negotiating directly with the corresponding railroad to have train-activated warning devices installed at a particular crossing provided the requesting entity and/or the railroad are willing to fund the installation,” the site reads. “Crossings located on public roads (i.e. state routes, county roads or city streets) are eligible for federal funding based on a priority basis.”

Some LaGrange Daily News readers on social media have said there used to be gate arms at the crossing, but FRA inventory reports, which list warning devices at the crossing, do not indicate that was ever the case.

The crossing has a railroad crossing sign, flashing lights and a sign that reads “DO NOT STOP ON TRACKS.”

Of the three prior accidents at the Park Avenue crossing since 2020, two were similar incidents to the one on Oct. 2, where a driver was crossing the tracks and their vehicle was hit by the train. One incident, from September 2013, involved an unoccupied car that was stuck on the crossing while it was closed for repairs.

No drivers were killed in the three accidents, though the driver in one of the three previous accidents was injured.

The total value of car damage listed from those three incidents is $9,500.

One other accident report prior to 2010 is listed for the crossing from 1985.

Mark Kostial with the City of LaGrange said there did not appear to be any legal requirement for the crossing to have gates, and noted that “the vast majority of rail crossings in the United States don’t have crossing arms.”

Sheriee Bowman, a spokesperson for CSX, said the Federal Highway Administration defines crossing signals as highway control devices and not railroad signals, and that GDOT determines the location and types of grade-crossing signals.

“At CSX, our goal is zero accidents and this is an important reminder to the public — always obey signs and signals at crossings, look both ways before crossing tracks and always expect a train,” Bowman said in an emailed statement.