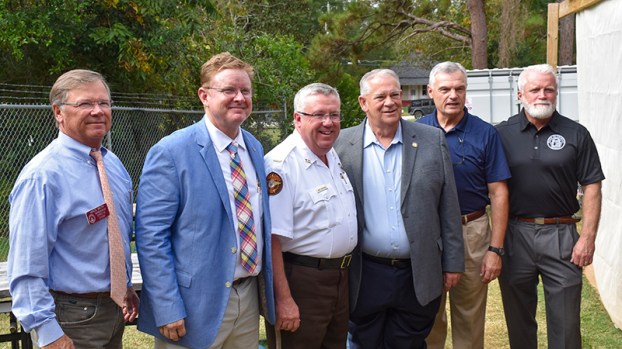 Georgia Speaker of the House campaigns for Jenkins at Beacon

David Ralston, the top Republican in Georgia’s state house, made a visit to LaGrange Thursday to rally supporters for one of the GOP’s targets this election — Democratic state Rep. Bob Trammell, who serves opposite Ralston as minority leader.

Ralston, the Speaker of the Georgia House, spoke at an event at Beacon Brewing Co. in support of David Jenkins, the Army veteran and helicopter pilot running to unseat Trammell. Trammell represents District 132, which includes much of LaGrange, as well as Grantville, Luthersville, Lone Oak, most of Hogansville and part of Newnan.

“We got a great candidate … I can tell you that he has great integrity. He served his country, he’s now serving his community,” Ralston said.

The Trammell-Jenkins race has generated more than $1 million in spending. The Republican State Leadership Committee, which works to boost Republicans in state legislatures across the country, has spent $700,000 on TV, radio and digital ads attacking Trammell. According to campaign finance filings, Trammell’s campaign has spent more than $300,000 in the race. The Democratic Party of Georgia has also sent out mailers attacking Jenkins. Jenkins’ campaign has spent about $50,000, according to campaign finance filings

“I want you to think about how hard it is to unseat the minority leader,” Ferguson said. “Guess what? He is about to do that.”

Robertson went after Trammell for his pro-abortion rights stance, saying he was someone who “consistently supports the murder of thousands of innocent babies.”

“The Bob Trammell you meet on the street in LaGrange, Georgia, is not the Bob Trammell that stands in front of the Democrats in Atlanta and cheers them on and pushes that Atlanta squad,” Robertson said. The problem, Brass said, was not Trammell but “the party that he leads.” Nix echoed that message.

“I’ll have to say this, Bob Trammell’s a friend of mine, … But really, he does not represent, I think, the values at all of the people [he represents],” Nix said.

Ralston emphasized the importance of the election. Some of the speakers reminded the crowd that following the 2020 census, the state legislature would be responsible for the redistricting process. The Democratic Party of Georgia has said it’s aiming to flip the house, which has had a Republican majority since 2004. That would require flipping 16 GOP-controlled seats.

Ralston said he’d been spending most of his time recently traveling the state to attend similar events.

“I know I’m in LaGrange today, but I don’t know what day of the week it is,” Ralston joked.

Ralston asked the crowd of Republicans to donate to Jenkins’ campaign, take a yard sign and “lend him your reputation,” to get the word out.