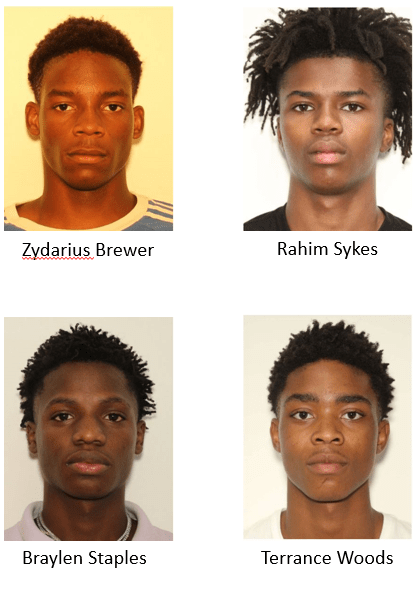 Four LaGrange men are wanted in reference to a shooting at Clayton State University that has left a student in critical condition.

According to a press release from the Georgia Bureau of Investigation (GBI), at approximately 10:30 a.m. on Oct. 24, Clayton State University Police Department officers responded to a call of a student being shot in Laker Hall.

Through the investigation, the suspects have been identified as Zydarius Arkady Brewer, 18; Braylen Tremaine Staples, 19; Ra’him Sykes, 18; and, Terrance Woods, 18. All four are from LaGrange and none of the suspects are students at Clayton State University, according to the press release.

CCSUPD officers and students rendered aid to the victim.

GBI stated that the student was taken to Grady Memorial Hospital where he remains in critical condition.

The investigation found that the four males were involved in the shooting incident.

According to GBI, Clayton State University’s on-campus surveillance system identified a vehicle leaving the area that was occupied by the shooters. The car was located in LaGrange by the LaGrange Police Department at approximately 1:30 p.m., but the four suspects were not in it.

GBI said the four suspects were in Laker Hall without the knowledge or consent of the university. The shooting is not believed to be a random incident.

The four suspects are all charged with aggravated assault with a deadly weapon (felony) and aggravated battery (felony).