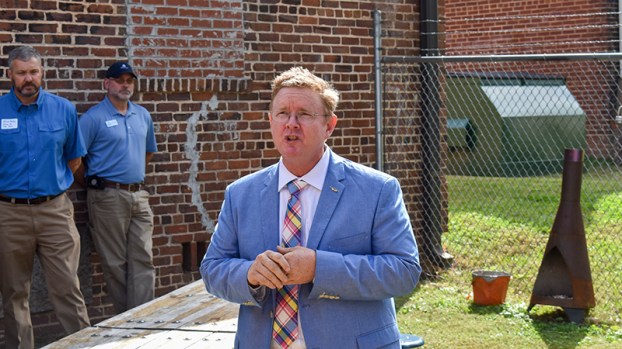 Above, David Jenkins speaks at a campaign event at Beacon Brewing Co. on Oct. 22.

David Jenkins, the Army veteran and air ambulance helicopter pilot running as a Republican in Georgia House District 132, was fined by the Georgia Government Transparency and Campaign Finance Commission for failing to file a personal financial disclosure statement (PFDS) when qualifying for the election.

A spokesperson for the commission, a state agency that administers and enforces the Georgia campaign finance laws, confirmed Jenkins was fined $125 on March 17. Jenkins paid the fine, the spokesperson said, but still had yet to file a PFDS. Jenkins filed his PFDS around 1:30 p.m. Wednesday, according to the commission’s website.

Reached for comment Tuesday, Jenkins said it was an oversight he made at the time of qualifying, which coincided with the start of the pandemic. Jenkins said he would work on the PFDS and file it Tuesday afternoon.

“Not having professional staff working with me on the financial end, it’s something that slipped through the cracks,” Jenkins said.

The spokesperson said the commission was not taking further action at this time, but that an investigation could occur if someone filed a complaint about Jenkins or if his filings became a “recurring issue.” Jenkins has filed financial disclosure reports about his campaign’s fundraising and spending as required by state law. Candidates must file a PFDS yearly.

A PFDS outlines a candidate’s fiduciary positions, business interests, properties, employment and investments. Georgia law mandates that candidates must file a PFDS within seven days of qualifying for the election.

Jenkins is running to unseat state Rep. Bob Trammell, a top Georgia Democrat who serves as the Minority Leader in the state House. The seat is competitive — Trammell beat a Republican challenger in 2018 by 749 votes, winning 52 percent of the vote.

In the June primary election for the district, more Democrats voted (4,971) than Republicans (4,617).

District 132 contains parts of Troup, Coweta and Meriweather counties, including much of LaGrange and part of Newnan.