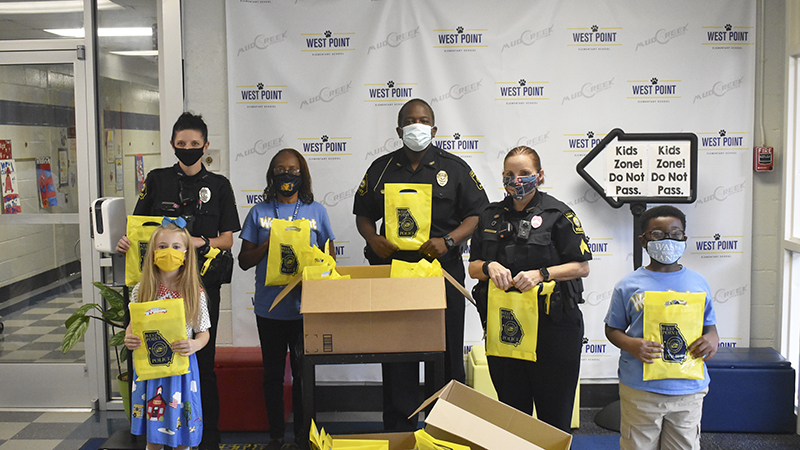 Above, West Point Police Officers pose for a photo with West Point Elementary students with goodie bags for Halloween.

When the Faith and Blue weekend was canceled on Oct. 10 due to poor weather, West Point Police Chief Donald Britt wanted to find a way to give out some of the items that had already been secured for the weekend. With Halloween on Saturday, Britt figured that the students at West Point Elementary would appreciate the goodie bags.

“This initiative started out from our National Faith and Blue Weekend,” Britt said. “Since we were rained out, we decided to give them to the kids for a Halloween treat.”

Inside each yellow goodie bag — which had the West Point Police Department’s logo on the outside — was a mask, hand sanitizer, a couple of pieces of candy, a pen, crayons and a coloring book titled “My Hero” that was full with pictures of first responders the children could fill in.

“We want them to be safe for Halloween,” Britt said.

The supplies were donated by Casey Cox.

The West Point Police Department has been trying to visit West Point Elementary as much as possible since Britt took over as police chief. Along with Wednesday’s donation, the police force has also helped by giving out milk earlier this summer and before COVID shut down visitations, the force would go to the school and serve breakfast to the students about once a month.

“It’s great to come and see the kids,” Britt said. “The kids are our future. One day they’ll be adults and working for they’ll be policemen, working for the newspaper or just different jobs. We’re just glad to see them every time we come out and just remind them that we’re their friends.”