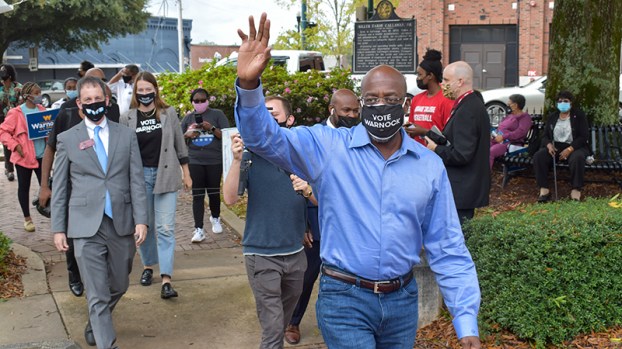 Above, Rev. Raphael Warnock waves as he arrives at Lafayette Square on Thursday afternoon.

The election, which has more than a dozen candidates running, is to finish out the rest of former Sen. Johnny Isakson’s term. Gov. Brian Kemp appointed Kelly Loeffler, a business executive, to the seat. Loeffler is running in the special election, as are Warnock and Republican Congressman Doug Collins.

Warnock is the senior pastor at Ebenezer Baptist Church in Atlanta, a pulpit once filled by Martin Luther King, Jr.

Warnock used his background as a pastor to deliver an address that was part political stump speech, part sermon. He started with 2 Chronicles 7:14.

“Scripture says, ‘If my people who are called by my name, will humble themselves and pray, seek my face, turn from their wicked ways, then I will hear from heaven, and I will forgive their sin, and I will heal the land,’” Warnock said. “Our nation needs healing. … I want to submit to you that a vote is a kind of prayer for the kind of world that we want to live in.”

The speakers emphasized the need to get out and vote and asked attendees to talk to their family and friends and ask them to turn out for Democrats.

“Not only are we faced with this pandemic, we’re faced with stupidity in the White House,” Edmondson said. “And we need someone to go there to help direct the next president of this United States, which I hope and pray, is Biden-Harris.”

Trammell repeated a statement he made on Saturday at the square that 2020 was “the most consequential election of our lifetimes.” Introducing Warnock, he said the pastor had been “a voice of moral authority” on issues of healthcare and social justice.

Warnock spoke at length, about 25 minutes, touching on healthcare, racial justice, the pandemic, climate change, taxes and other topics. But he also told a story with a local tie, about Otis Moss Sr.

Moss Sr. was the father of Otis Moss Jr., a pastor and civil rights leader who worked with MLK Jr. Otis Moss III, a friend of Warnock’s, is a pastor in Chicago.

The story goes that Moss Sr., a resident of rural Troup County, tried to vote in 1946. He walked into LaGrange, where he was told by poll workers at several locations to go vote at different locations. By the end of the day, polls had closed.

“He walked 20 miles and never got a chance to vote that year. And the next year, he died,” Warnock said. “We’ve got to vote for Otis Moss Sr.”

Warnock is leading in recent polls, but few have shown him with a majority of votes. If no candidate wins a majority, the top two will move to a January 2021 runoff. The GOP vote will likely be split between Loeffler and Collins, with one of them facing Warnock. Democrats have historically struggled to replicate November turnout levels in January.

Warnock said in an interview that he saw a path to victory “perhaps on Nov. 3.” Should he be in a runoff with one of the Republicans, Warnock said his campaign “intend[s] to prevail,” comparing himself to David versus Goliath.

“My candidacy was an uphill journey from the start … I’m running against the wealthiest member of Congress [Loeffler], and a well-connected career politician [Collins],” Warnock said.

Media outlets have estimated Loeffler to be the richest U.S. Senator, with assets worth hundreds of millions of dollars. According to the Atlanta Journal-Constitution, Loeffler and her husband have spent $23 million on her campaign, which has raised $28.25 million in total.

Warnock, though, has also raised heaps of cash — more than $20 million, of which he has spent about $16.4 million, according to the federal elections commission. Collins has raised about $4.7 million and spent more than $4.8 million. The difference between Loeffler and her closest rivals, though, is that her campaign is mostly self-funded.

Time is running out for candidates to campaign. Warnock’s rally was just five days before the election, but he said he’s been visiting small towns all over the state — Cuthbert, Thomasville, Fort Valley, and now LaGrange.

“There’s this narrative that folks who run for high office in the state, Senate candidates don’t come to certain places … you’ve got to go and talk to the folks that you’re asking to represent,” Warnock said.

A crowd gathered at Lafayette Square on Tuesday night in observance of Domestic Violence Awareness Month. The event remembered the... read more