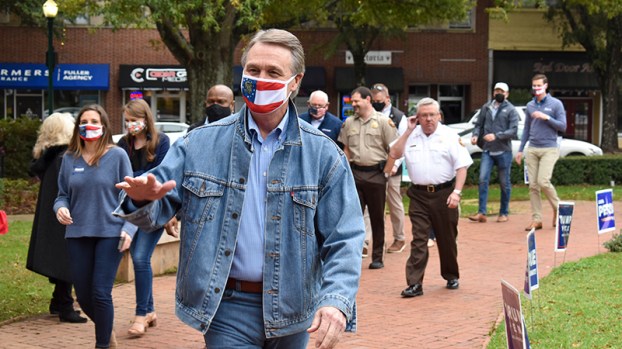 About 75 people gathered at Lafayette Square on a chilly Friday morning to hear from U.S. Sen David Perdue, the incumbent Republican seeking reelection on Nov. 3. Perdue is a close ally of the President and is tied in the polls with his Democratic opponent, Jon Ossoff.

“What we’ve proven in the last four years and what we believe in really works — economic opportunity for everybody, fiscal responsibility, limited government and individual liberty,” David Perdue said.

Perdue is a former corporate executive while Ossoff is an investigative filmmaker.

The two had a fierce debate on Wednesday, but a final debate between the two — scheduled for Sunday — was canceled after Perdue said he would instead join Donald Trump for a rally in Rome.

“Senator Perdue, after a long and successful career in business, has devoted the last six years of his life to trying to improve this country. And he has been a tireless advocate for LaGrange and Troup County and the state of Georgia,” Thornton said.

Thornton said Perdue has been a “good friend” to the business community, mentioning federal Payroll Protection Program loans and saying Perdue has been “a great supporter of Kia [Motors Manufacturing Group].”

The mayor invited Robertson, a former police officer, as well as Woodruff and Dekmar, onto the stage.

Robertson said that as a former law enforcement officer, he “conducts threat assessments” in his daily life.

Perdue was introduced by his cousin, the former Georgia Gov. Sonny Perdue, who now serves as Secretary of Agriculture in the Trump administration. The former governor emphasized the importance of Republicans holding the Senate, so they can approve more conservative judges.

“When we re-elect President Trump, if we lost the Senate, there will not be another judge like Amy Coney Barrett,” Sonny Perdue said.

To win Georgia, Republicans need to “run up the score” in red counties like Troup, Sonny Perdue said, in order to combat Democrats who have been successfully flipping areas in suburban Atlanta.

“They’re [Democrats] going to have votes, they’re out working hard, these metro areas and all around Atlanta, Fulton County, DeKalb, even now in Henry [County] and, and Cobb County, Gwinnett County, you wouldn’t believe the change there,” Perdue said.

David Perdue repeated lines that Ossoff wants to defund the police (Ossoff has said he does not).

He also said that a Democratic Senate would add Washington, D.C. and Puerto Rico as states, pack the Supreme Court and “fool around with the Electoral College” to create a “one-party state.”

Like his cousin, the Senator spoke about Georgia’s population growth.

“That’s a good thing. We want to continue that,” he said. “But we need to reeducate some of these people who are coming from broke states that don’t work, and bringing their political ethos down here to Georgia.”

When the Martin family unexpectedly lost their 2-and-a-half-year-old daughter, Jane, in February, they embarked on a road of grief and... read more