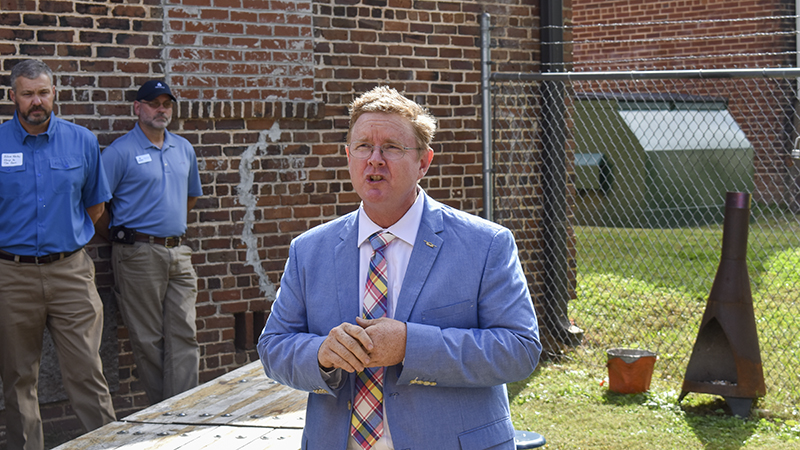 Above, David Jenkins speaks at a campaign event at Beacon Brewing Co. on Oct. 22.

In a blow to Georgia Democrats, Republican David Jenkins has beat out Rep. Bob Trammell, the minority leader of the Georgia House, by a margin of 675 votes.

“I’m elated to have won, and I just appreciate all the people that supported me through this,” Jenkins said. “The election has been very hard and challenging but, you know, the bright spot in all that is all the wonderful people I’ve had an opportunity to meet. And I look forward to serving the district.”

Trammell, a lawyer who lives in Luthersville, will have served in the seat for six years when his term ends. He became minority leader in 2017, replacing Stacey Abrams when she resigned to run for governor.

“I want to extend my congratulations to David Jenkins,” Trammell said. “I wish him much success as the representative-elect, and I want to thank the constituents of the 132nd District for trusting me to serve them for six years. It’s been an honor and a privilege.”

In 2018, Trammell won reelection by about 750 votes, though there were about 5,000 more votes cast in the race this year.

Jenkins, who lives in Meriwether County, is an air ambulance helicopter pilot and an Army veteran.

The race became one of the most expensive state Houses races in Georgia as a GOP group, the Republican State Leadership Committee, spent about $1 million to defeat Trammell. According to campaign finance reports, Trammell’s campaign spent more than $480,000 in the race, and Jenkins’ campaign spent about $62,500.

The Georgia Democratic Party also invested in the race, but has not said how much it spent.

Jenkins said he had expected to win. Gov. Brian Kemp won the district in 2018.

“I’ve looked at the data on the district and that was a part of, when I made my decision to run was based on the fact that it was a winnable race,” Jenkins said.

Despite losing, Trammell said he was glad to see high turnout in Georgia, which could top 5 million. The presidential race has not been called by any major media outlet, and there are still ballots to be counted in metro Atlanta.

“I think that the results show that a Georgia is a close competitive state, our district is a close, competitive district. … With the high turnout and engagement, I think that’s a good thing for Georgia,” Trammell said.

Moving forward, Jenkins said the top issue on his mind would be COVID-19 and its economic impacts. In his first legislative session, he wants to work to expand rural broadband access.

What’s next for Bob Trammell?

“Probably a nap,” he joked. “Campaigning and politics is a is a team sport, and we’ll use a little bit of the time that we have now to spend with them. Then, we’ll say what’s next.”