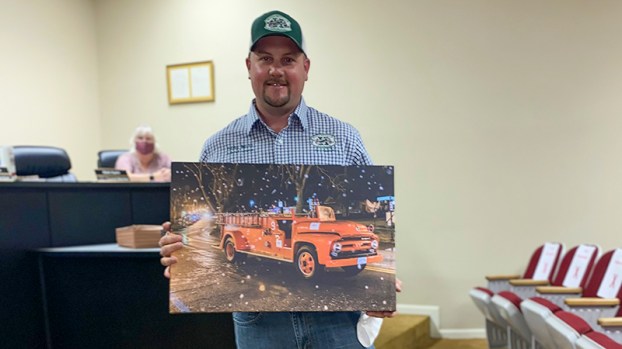 Jones has invested over 200 hours on nights and weekends to restore the 1953 Pirsch Pumper.

At Monday night’s Hogansville City Council meeting, he was named the honorary fire chief of Hogansville.

The city council announced a proclamation for him that stated that he has been an invaluable member of the staff of the city serving in various capacities .

“The work he has done on the fire truck is outstanding,” said Mayor Bill Stankiewicz. “We really appreciate Mr. Jones’ work on it.”

In September, the fire truck was transported back home to Hogansville after being found in storage at Troup County Fire Department’s Rosemont Station No. 5.

Jones was able to get the fire truck up and running to debut at the annual Hogansville Christmas parade in 2019.

The 1953 Ford F600/Pirsch pumper was one of the last fire trucks in Hogansville before the city got out of the fire service business in the early 1980s.

Stankiewicz said that Jones has served Troup County as a volunteer fireman for several years.

The proclamation noted that without Jones’ help and work on the firetruck, it would not be able to run or carry passengers.

The city of Hogansville also announced Monday night that the Hogansville Christmas Parade will take place on Dec. 5.

City Manager Jonathan Lynn said that the parade will begin at 6 p.m. and utlize its regular route.

“We are working now to have other Christmas activities throughout the day starting at noon,” Lynn said.

In a blow to Georgia Democrats, Republican David Jenkins has beat out Rep. Bob Trammell, the minority leader of the... read more