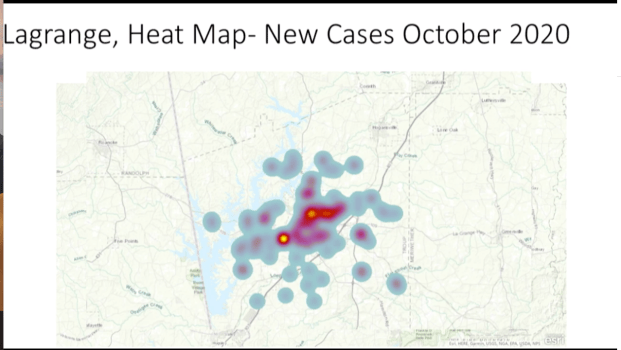 Above shows a screenshot of the LaGrange heat map of new COVID-19 cases during the month of October.

“As we’re moving into cooler weather, we know that a lot of people are going to be moving indoors for more events,” Thornton said. “We know we’re heading into the holiday season where there’s going to be a lot more gatherings.”

District 4 DPH recently reached out to elected officials after observing upticks in cases in the county and decided to map the data.

“What we found was really concerning,” Harris said.

“Almost all the community is affected, and we need to treat it that way,” Tramell said.

Positivity rates have been increasing across the state, Harris said, and cases are slowly trending upwards.

Thornton said Wellstar West Georgia Medical Center told him they currently have 16 confirmed COVID-19 patients and 22 under investigation, a “big number,” he said. Thornton said that number was in the single digits a month ago.

Thornton has also talked with Dr. Kenneth Horlander, he said, who has mentioned flu cases on the rise.

Asked what was leading to more cases, Harris cited people having more small gatherings with family and friends, as well as outbreaks in workplaces.

While acknowledging that “people are starving for that social contact,” Harris said that maintaining distance and wearing masks at such events was critical.

Stankiewicz recently attended an event with Rep. Drew Ferguson the night before Ferguson tested positive for COVID-19. It caused Gov. Brian Kemp, who also attended, to have to get tested and quarantine for days.Stankiewicz said that since the event, he had displayed no symptoms and had received a negative COVID-19 test. He was hopeful that it hadn’t been a “super spreader” despite the large crowd and the fact that Ferguson did not wear a mask. Kemp also tested negative.

“I was exposed, it was the governor of the state, it was in all the papers, it was on the national news and it came from a United States congressman. And I have yet to be contacted by anyone [from DPH],” Stankiewicz said. “I know four other people who were at the event and none of us have been contacted.”

Troup’s three cities passed similar ordinances in August that allowed businesses to opt in to a mask mandate. If a business chose to opt in, the cities can enforce masks at that business.

Stankiewicz said he had some regrets about the leniency of mask ordinances.

“We surveyed our businesses in Hogansville, and only two are requiring masks. In other words, they opted in on the mask ordinance,” Stankiewicz said. “I think that collectively, we may have made a mistake when we passed our ordinance, and we went with opt in instead of opt out.”

Gov. Brian Kemp resisted calls to mandate masks statewide and has sought to restrict the powers of cities and counties in mandating them. Some of the elected officials on Thursday’s call had criticized Kemp for restricting local power, but Thornton did praise the governor Thursday for setting the right example.

“I don’t think I’ve seen governor camp anywhere on TV or on Facebook or in public without a mask, … if you sort of want to model good behavior, I think Gov. Kemp deserves a shout-out for modeling good behavior, even if he hasn’t mandated the mask,” Thornton said.

Crews, who works as executive director of Poplar Creek Senior Care, described a recent outbreak there.

“There’s this great fear in the healthcare industry, particularly with seniors, that if it gets into your building, it can be disastrous,” Crews said.

A few weeks ago, an asymptomatic Poplar Creek resident tested positive at the hospital. The facility did a mass testing on Friday, which on Saturday discovered nine positive residents and five positive staff members. Poplar Creek has 29 residents, according to the Georgia Department of Community Health. By Tuesday afternoon, two people had died.

Crews mentioned two residents who mostly stayed in their own rooms who tested negative.

“What I’ve seen here and having experienced death among residents, that those people that tend to wear the mask, do the social distance, they seem to have pulled through this at this point,” Crews said.

Responding to a viewer question about this year’s Christmas parade, Thornton noted the LaGrange-Troup County Chamber of Commerce plans to hold the parade, but said it was “subject to change” if there is a spike in cases. Stankiewicz said the Dec. 4 Hogansville parade was also still on.

“As we get closer to the event, we’ll have to think about it, because if we do have this tremendous spike it, it may be not smart,” Stankiewicz said. “Because we can encourage social distancing, but in a parade environment, I don’t know how you enforce it.”

LSPA to hit the stage

LaGrange can expect a plethora of events to attend during the weekend. To start, Diverse Power and the Lafayette Society... read more