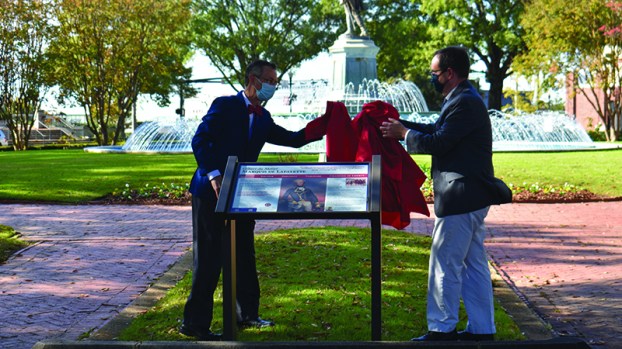 The marker, a gift to the city of LaGrange from Lafayette Alliance, describes the history behind the Frenchman for whom the square is named.

Lafayette was a war hero and general in the American Revolution whose legacy includes the city’s name. In the 19th century, he reportedly visited the West Georgia region and remarked that the area reminded him of his wife’s French estate, LaGrange. Hence the name.

Richard Ingram, chair of Lafayette Alliance, said the idea for a marker came to him when he spoke to a couple on the square who were visiting from Guntersville, Alabama. The couple asked Ingram what he knew about Lafayette.

“And I gave him a tutorial on the Marquis de Lafayette. And now we’ll have a permanent tutorial, right here,” Ingram said.

LaGrange Mayor Jim Thornton described the square and its statue, which was dedicated in 1976, as the center of the city. When the city was founded in 1828, he said, the city limits were set as a circle with a one-mile radius from the square. Over time, it’s also become the civic center of LaGrange.

“When people come to our town, as has recently happened through the election campaigns we’ve had, we’ve had visitors from all political parties coming through LaGrange,” Thornton said. “They always want to come to Lafayette Square, because this is what’s associated with our town.”

Thornton went on, speaking about Lafayette’s fight to advance liberty in the U.S. and other countries. Lafayette opposed slavery, co-authored the Declaration of the Rights of Man and of the Citizen and was also a key figure in the French Revolution.

“That has been the struggle of the United States for the last 244 years. It has been a continual struggle to expand liberty to expand it beyond what was meant at the time,” Thornton said.

Bill Hunnicutt, executive director of the downtown LaGrange Development Authority, spoke about the square’s place as the heart of LaGrange and the inspiration Lafayette provides. The marker, Hunnicutt said, will tell future generations not just who Lafayette was, but why he’s important to the community.

“Just a few blocks from here we have Sweetland Ampitheatre,” Hunnicutt said. “And we have rock stars that come from all over the world that come and entertain us. But right here on our square we have what many historians have called the rock star of the American Revolution. And he was that because he came from out of town, when he didn’t have to, and helped America become great.”