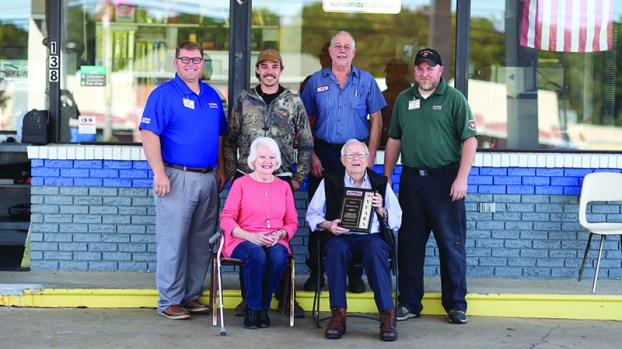 Above, Wiley Woody was honored for 50 years of service with Woody’s Service Center and U-Haul Distribution by U-Haul executives Thursday.

Since 1970, Wiley Woody has been filling up gas tanks, changing oils, checking brake pads and more at Woody’s Service Center on Commerce Avenue.

The final full-service station in the area closed its fuel business after 49 years in 2019, but that hasn’t stopped the family from still taking care of the community’s needs.

Wiley, who is turning 87 years old in December, still comes into work almost every day.

“When we first opened, it was a gas station, service station and auto repair shop,” Wiley said. “I have seen a lot over these past five decades.”

Wiley said over the years he has a lot of regulars come to Woody’s for their car needs, but he has also has met plenty of strangers passing through LaGrange needing their car serviced.

Wiley started working in the service station industry in 1963 after serving four years in the U.S. Air Force. After renting and operating other service stations for several years in LaGrange, he settled on the current station location in 1970.

Woody’s became the second U-Haul Dealership in LaGrange after he took over the Commerce Avenue location. They are frequently a Top 100 Dealership.

For his hard work and dedication to the job, executives even stopped in LaGrange this week to honor Wiley.

“It’s been a blessing to have the U-Haul Dealership, and we just get to know people as they move into town,” Wiley’s son, Greg said.

“And then if we don’t like them, then we send them back.”

Greg started working at the station when he was around 12-years-old doing odd jobs like pumping gas or mopping the floor.

“It’s been great working under dad,” Greg said. “He’s taught me a lot throughout the years, and it’s just been great to have a relationship with him and spend more time together. It’s been a blessing.”

The youngest of the Woody men helping run the station is Levi, who works as a mechanic and like his father, also started working in the shop around 12 years old.

“He gave us a good foundation and has always kept us on track,” Levi said. “We’re somebody people can trust. That’s what people want because we have been here for so long and have a reliable reputation of doing a good job.”

Wiley’s wife, Myrna, said for decades so many people have relied on the Woody family to help with them with car needs.

“We have had so many people that would not go anywhere else,” Myrna said.

“They shed some tears whenever they quit selling gas.”

Woody’s also sees quite a few customers from LaGrange College.

“I have several parents come through when they move their college students in, especially the girl’s parents,” Greg said. “We have dads come in here and just ask that we take care of their daughter’s cars.”

Over the 50 years of serving LaGrange, Wiley has met tens of thousands of customers with a joke and a smile.

“I have been blessed to have my son and his son here and their family,” Woody said.