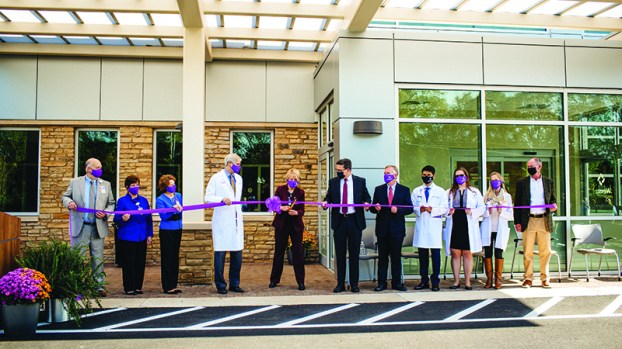 The new, 40,000-square-foot ECCC came at a cost of $24 million. It includes a linear accelerator machines, a device used for radiation treatments that destroys cancer cells without damaging surrounding tissue. Other features are new diagnostic technologies, more patient exam rooms for radiation oncology, expansion of medical oncology’s practice suite, an in-house pharmacy for chemotherapy preparation, a boutique selling wigs and other items for cancer patients, a resource center to learn about cancer and a chapel and public meeting space for support groups and other activities.

Donations for the renovation, which has been a decade in the making, came from Callaway Foundation, local businesses, residents and employees. They made up about 40 percent of the cost of renovations. Callaway Foundation chipped in $5 million, Wellstar employees gave $1.6 million and auxiliary volunteers gave $550,000.

“Generations of family members, friends and neighbors will have the best possible care, and that will be available close to home,” said Tripp Penn, president of Callaway Foundation, at the event.

Dr. Robert Taylor, a Wellstar oncologist, said the donations from the community is “something you don’t see all the time, something I don’t think you should take for granted.”

Wesley Smith of the West Georgia Health Foundation Board thanked his fellow board members and the volunteers and donors who made the new ECCC a reality.

“Many of them pledges to work on this project for four years. Through the tumultuous financial times, most of them gave eight years,” Smith said.

Taylor also said he’s excited about new equipment and said the linear accelerator, which carries a $5 million price tag, was “like something out of ‘Star Wars.’” He described how he has been able to perform brain tumor radiation on patients with no anesthesia, no pain and no cutting, using X-Rays that “precisely and accurately destroy that little area of tumor inside there.”

“It’s a little bit of a miracle, even to me these days, and I’ve done hundreds of these.” Taylor said. “But to watch them get up off the table, after 30 minutes, to watch them just put on a jacket and saunter out into the facility, having no idea that they’ve even been treated at all, and knowing that we’ve destroyed their brain tumors absolutely.”

The center, named for Dr. Enoch Callaway, first opened in 1975. The official reopening date is Nov. 9.

Callaway was an “early leader in cancer care in Georgia and the U.S.,” according to Wellstar.

“He began his pioneering efforts here at a time when people were reluctant to even say the word cancer. People feared cancer so much, they felt some shame if a family member had cancer, but he started this program,” said John McKibben, chairman of the Wellstar Board of Trustees and the West Georgia Medical Center Board.

In 1938, Enoch Callaway started a cancer clinic at the hospital, then called City-County Hospital, after his 2-year-old daughter died of sarcoma.

“The legacy of this special place started with a tragedy,” Penn said. “And after Dr. Callaway lost his two-year-old daughter, he was absolutely devoted for the rest of his life to the battle against cancer.”

McKibben thanked the doctors and nurses of the ECCC, saying they provide not just medicine but “mega doses of hope and kindness.”

Wellstar Health System CEO Candice Saunders spoke about the common humanity among those who have been affected by cancer.

“I looked at this whole facility and the team it takes to help someone navigate through cancer. I remember my older brother died of colon cancer. And my father died of lung cancer,” Saunders said. “And I remember, as a family … through that experience, how important the hope, the care and the compassion was.”