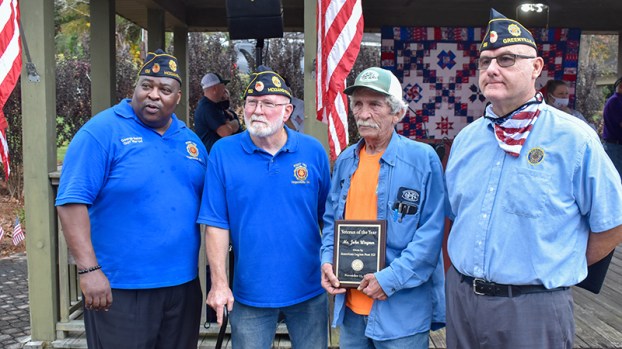 The featured speaker for the event was Steve Roberts, a retired command master chief petty officer in the U.S. Navy.

Roberts spoke about the history of the holiday and said it celebrated all the veterans who have demonstrated “courage, honor, grit, determination, and an undying loyalty to the basic tenets on which this country was founded.”

Roberts then gave out several special coins, a tradition among Navy master chiefs, he said.

His speech focused on supporting veterans and their families.

Roberts spoke about the declining share of the U.S. population that are military members or veterans.

“As the size of our military shrinks, and the connections between the military personnel and civilians appear to be growing more distant,” Roberts said. “And why do I quote these numbers? To stress the importance of recognizing and supporting your veteran family.”

According to Pew Research Center, 18 percent of Americans were enlisted or veterans in 1980. That share was 8 percent in 2014.

He also spoke about the mental health crisis among veterans. The U.S. Department of Veteran Affairs found in a 2019 report that about 17 veterans die by suicide per day.

“We are losing veterans at an alarming rate,” Roberts said.

Families of veterans also need support, Roberts said. He told a story about stopping at a small-town gas station in rural Georgia, where a woman asked about his veteran shirt.

After explaining its origin — the shirt was from a run to remember those who died in the War on Terror — the woman began crying and told Roberts that her son had died in Afghanistan. Roberts gave her the shirt to keep.

“That just reiterated to me how important it is that I make myself available, as a vet that doesn’t have as many problems as so many of our vets have,” Roberts said. “And to keep the right attitude, and to share my story, so I could pick someone else up. And that’s what we need to do.”

Roberts was given a plaque for speaking from Hogansville-based American Legion Post 152.

Members from Post 186, located in Greenville, Georgia, were also present.

Bill Charron, the commander at Post 186, read a poem, “I will find you,” about missing prisoners of war.

“So, we will keep on searching, until we finally get you home, where we will be your family, and you’ll no longer be alone,” Charron said. “Then we’ll send you off with slow salutes, and place you in the hallowed grounds. Till then be very patient comrades, although now lost, you soon will be found.”

John Wagner was surprised and given the veteran of the year award by Post 152. Wagner, a marine veteran and meter reader for the City of Hogansville, has worked for the city for more than 40 years.

George Bailey, a Gulf War veteran and the chairman of the LaGrange-Troup County Chamber of Commerce, asked those in attendance to support Post 152 financially to “help keep the lights on … and also help us help other veterans.”

At the ceremony’s close, Quilts of Valor presented handmade, patriotic quilts to 15 veterans. QOV is a nonprofit that enlists volunteers to make quilts for veterans.

The battle continues: Veterans encouraged to not lose hope when facing PTSD

As the rained trickled down in Troup County on Wednesday, veterans from all backgrounds and branches were honored for Veterans... read more