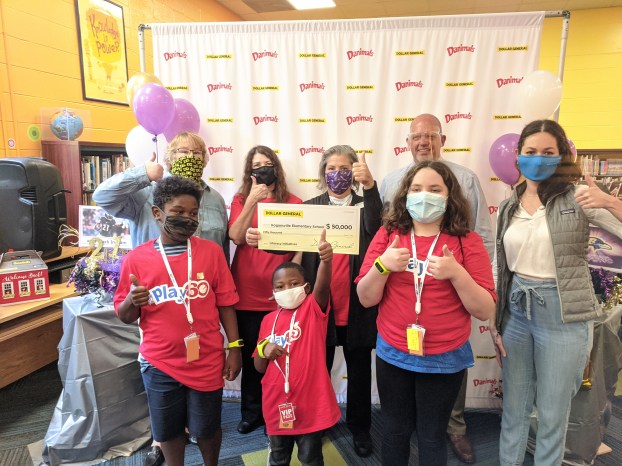 Monday was a big day at Hogansville Elementary School.

The school was the grand prize winner in Danimals Virtual Recess Takeover contest, which meant a day of fun for students, including a virtual meet and greet with NFL running back Mark Ingram.

Ingram, who won the Heisman Trophy at the University of Alabama, now plays for the Baltimore Ravens.

Ingram took questions from students, and most of those were about football. However, he told students that whatever they want to achieve, they should go for it.

“You want people to laugh at your goals, think you can’t accomplish them,” Ingram said. “If people think your goals are too big, then that’s the goals you want to try to accomplish. Nobody can stop you.”

He talked about his father’s incarceration when he was growing up, as well as several of the injuries he had to overcome on his way to the NFL. He told students to have a good support team around them.

“Keep positive people around you, listen to everybody who wants to see you do well like your parents, whoever your guardians are, your elders, your teachers in the classroom, your principal, adults who care about you,” he said.

To enter the contest, Diane Paine, TCSS Nutrition Director, submitted statements about Hogansville Elementary staff, who understood the importance of students continuously receiving healthy meals while school was not in session.

“The principal and counselor personally called each household to ensure they had food and the resources they needed while school was not in session,” Paine said, according to a TCSS press release.

According to the press release, each student also received a ‘swag bag’ with fitness equipment from Danimals and teachers received a stocked fridge in the teacher’s lounge.

Danimals also awarded ten runner-up schools with a NFLShop.com gift card along with a personalized video message from Ingram.

However, Ingram wasn’t the only surprise.

Dollar General also heard about the school getting honored and decided to add to the school’s efforts to support literacy. Dollar General Corporation surprised Principal Turner and Hogansville Elementary School with a $50,000 gift to back the school’s literacy initiatives. The company also awarded approximately $10,000 in supplies, which included a book for every student, gift cards, and 3M supplies to teachers, staff and administrators.

“During this time when education has been disrupted and there is a threat of a widening academic achievement gap, we are grateful for all the educators who are working to ensure their students receive continuous educational support,” said Denine Torr, Dollar General’s senior director of community initiatives. “Through our mission of serving others, we are proud to join Danimals® and help Hogansville Elementary build healthy bodies and minds.”