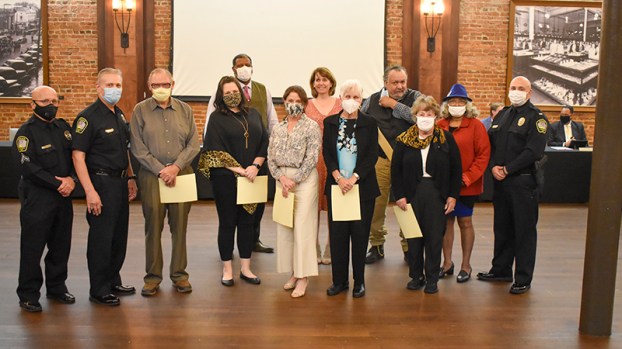 The academy lasts 10 weeks and is intended to create better community relations between citizens and LPD and to educate citizens about police conduct and legal authority. In the class, participants learn about day-to-day police operations, constitutional law, patrol operations and criminal investigations.

The participants were able to partially participate in scenario-based training events, including traffic stop training and use-of-force scenarios.

“We love doing this. We have a great time working and educating with these fine folks, and they’ve certainly made it enjoyable for us,” said LPD Lt. Eric Lohr.

A public hearing was scheduled for Dec. 8 to discuss a rezoning application for nine lots at 100104 Jordans Way and 107-127 Aaron Drive.

The council discussed the rezoning application at its work session Tuesday morning. It comes at the request of West Georgia Star, a nonprofit of the LaGrange Housing Authority.

West Georgia Star would like the lots to be reasoned from R-5 A1200 residential to R-2 residential in order to build duplexes there.

Council member Willie Edmondson said he had heard from constituents who live nearby that were concerned the project would reduce their property values.

There was also one concern from the LHA about a nearby property on Ragland Street. Increased traffic from the duplexes could make backing out of that property problematic, though the possibility of installing a turnaround there was discussed.

Council Member Nathan Gaskin also said he was concerned the duplexes would bring increased foot traffic despite the lack of sidewalks.

“You’re going to have people living in duplexes that are walking on roads. And that ain’t cool in our city,” Gaskin said.

Lastly, a first reading was held for an ordinance that codifies some reorganization to the public services and utilities departments.

This was the last meeting held at the Del’Avant Center, with meetings set to move back to council chambers from here on out.

Del’Avant had been used to accommodate social distancing — the council may use it again if cases spike in the area or if a large crowd is expected.

How to vote in Georgia’s runoff elections

A small number of ballots are yet to be counted in Georgia, but the Associated Press and other outlets have... read more