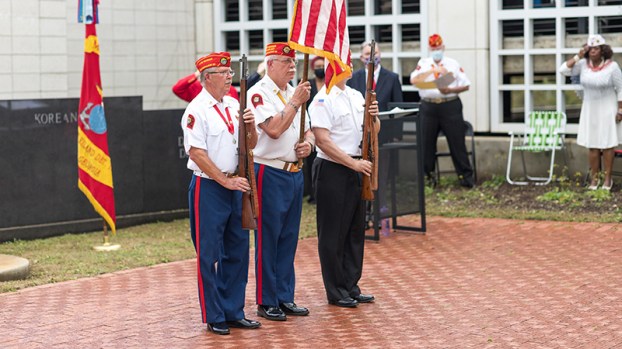 The battle continues: Veterans encouraged to not lose hope when facing PTSD

As the rained trickled down in Troup County on Wednesday, veterans from all backgrounds and branches were honored for Veterans Day.

Patricia E. Liddell MSgt, U. S. Army Retired spoke on how wars may have been won but the battles continue mentally and spiritually on the home front.

She referenced specifically what life after World War II was like for many veterans coming home from war.

“The United States had experienced victory,” Liddell said. “There was adjustment, disappointment, struggle in beginning a new life. Families had to start over. Businesses were starting from scratch. Families coped with death and loss.”

“African Americans, native Americans and Latinos served in the military only to return to a segregated [nation] and status as a second-class citizen at home,” Liddell said. “Minorities were more likely not able to take advantage of their veteran benefits. The war was won but the battle had just begun.”

Many war veterans coming home had to reintegrate into society with a new way of living.

“Decades later, the war on terror lingers on,” Liddell said. “When I was stationed at Walter Reed and at Fort Benning, I saw in the psychiatric ward that they didn’t just have flashbacks, but the inability to separate the battleground from Panama, Gulf War, Afghanistan to their own neighborhoods.”

Despite experiencing victory and surviving war, soldiers had no easy life following their victories overseas.

“Jesus died for us, yes, though we were sinners,” Liddell said. “Even though we know Jesus died for our sins, we do not feel victorious. The war on death was won, but it feels like the battle has just begun in our personal lives, our families and our world.”

Liddell mentioned how she felt that following the election, the nation felt divided.

Liddell said the victory was in everyone’s hope and that suffering will lead to hope.

“Where do we get this hope?” Liddell said. “Our suffering, endurance and character building chapters in our lives do nothing but make us stronger.”

Liddell encouraged every veteran to look toward the cross for their hope.

“The victory is a man named Jesus that was nailed to a cross that bore our sins before we knew to call them sins,” Liddell said. “One who paid the ultimate sacrifice for those who did not deserve it. I know I did not deserve it.”