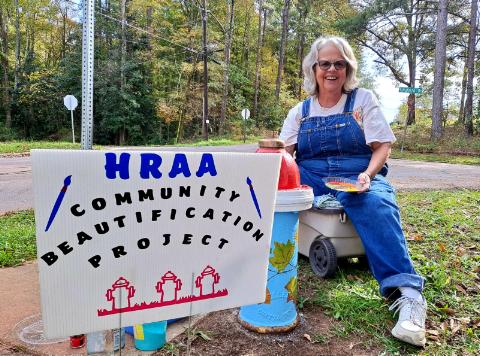 The Hogansville Regional Arts Association (HRAA) has received a $1,000 grant from the Georgia Council for the Arts to complete three projects that will help continue to promote the city.

The $1,000 grant requires a 100 percent match to be in compliance with the Georgia Council for the Arts.

The Hogansville Downtown Development Authority has pledged $500, which means the HRAA needs to raise $500 more to meet the match requirements.

The three projects are the following: a Royal Remembrances video, with interviews of Hogansville natives about their experiences at the Royal Theatre; a music video by Eddie Robinson about growing up in Hogansville; and “Stories of Hogansville,” which will discuss locations around town.

According to HRAA Treasurer Brandon Rettke, they’ve already kickstarted some of the video portions of the projects.

“We are going to use a portion of the grant to help pay for the editing and voiceovers of the videos,” Rettke said. “It is something we will be able to use in town for tourism and advertising, especially for when the Royal Theatre re-opens.”

Rettke said Councilwoman Toni Striblin advocated strongly for the renovations and restoration of the theatre long before she stepped onto council.

The Royal Theater is expected to reopen in 2022 after it undergoes major renovations throughout the building.

Rettke also said it was Striblin who started the HRAA 16 years ago to promote and enhance the appreciation of cultural arts through education, preservation and community activities for adults and children in Hogansville and surrounding rural counties.

Just as the pandemic was hitting the community earlier this year, the HRAA began a community beautification project led by Hogansville resident Jackie Terrail to have local and visiting artists paint the city’s fire hydrants.

“I’ve wanted to embellish the fire hydrants for 15 years,” Terrail said. “It has been a great opportunity to bring the community together and to make living in and visiting Hogansville a little more colorful.”

Rettke said that project is still ongoing and the city should expect to see more fire hydrants embellished in the coming months.

“We had many members of the community participate in it,” Rettke said. “A lot of people actually did the ones like right outside their house or right down the street from themselves. More than 35 hydrants have been completed or are underway, with many more planned.”

To support the HRAA’s grant match or any of their other projects, tax deductible donations can be sent via the following: Cash App: $HGVLarts, Facebook: @HogansvilleRegionalArtsAssociation, Check: Payable to Hogansville Regional Arts Association.

Money can be dropped off at Blue Train Books, located at 200 E Main Street in Hogansville or mailed to PO Box 1302, Hogansville, Georgia 30230.

“We just want to help to continue to beautify and transform the city,” Rettke said.

“We want to help the city to keep evolving. I think those two videos will help us quite a bit with that.”

The city of Hogansville has announced that it will continue with its annual Christmas parade. The “Christmas in Toyland” parade... read more