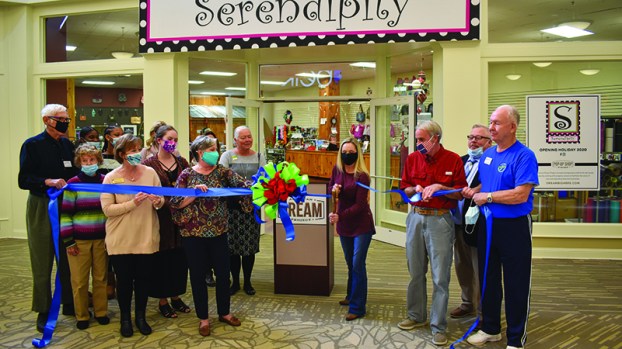 Eric and Sue Mallard have owned Serendipity, an embroidery and vinyl store that sells purses, gifts and baby items, since October 2018. After hearing about a new contest at LaGrange Mall, “LaGrange’s Next Great Pop-Up Shop,” they submitted an application, were interviewed about their vision and had their inventory reviewed.

The mall announced Serendipity as the winner of the contest in September, and on Friday, Serendipity cut the ribbon on their new space. The pop-up shop will last for six weeks during the busy holiday season, from now until early January.

The pop-up shop is part of the American Dream Project, an initiative of Hull Property Group, owners of LaGrange Mall, to connect small businesses with brick and mortar spaces.

“In honor of their hard work, vision, and efforts to grow their business by going after their dreams, we are thrilled to present them with this key to their new storefront,” said Donna Powell, property manager at the mall, at the ribbon cutting.

Sue Mallard expressed her appreciation to attendees before the ribbon was cut.

“We’d just like to thank the mall for giving us this opportunity to grow our business and take it to the next step,” she said.

In an interview, Mallard said they were “thrilled” to have the opportunity. Moving all their inventory was no small task, however.

“If it hadn’t been for Katie’s best friends and her husband, and wonderful employees … thanks to everybody who made it in two days,” Mallard said.

Sue and Eric’s daughter, Katie LaCount, runs the business, and one of their grandchildren helps out too. The store stocks a variety of decorations, clothing, bags and jewelry, but personalizing those items is their specialty. They offer embroidery, vinyl services and sublimation.

Even with the pandemic, Mallard said business hasn’t been bad. Serendipity, which also operates a storefront at La Brisa Plaza on South Davis Road, closed for about three weeks at the start of lockdown.

“It started out slow, but it picked back up and things stayed normal. It has really increased … we’ve been blessed,” Eric Mallard said.

Describing serendipity as “family-owned, faith-based,” Sue Mallard credited their faith with the opportunity at the mall. It’s somewhere they’ve wanted to be for a while.

“I can tell you we’ve prayed for this for years,” she said “And God answered our prayers.”

Glass sculptures of every shape and size were carefully and strategically placed inside the LaGrange Art Museum on Thursday.  Each... read more