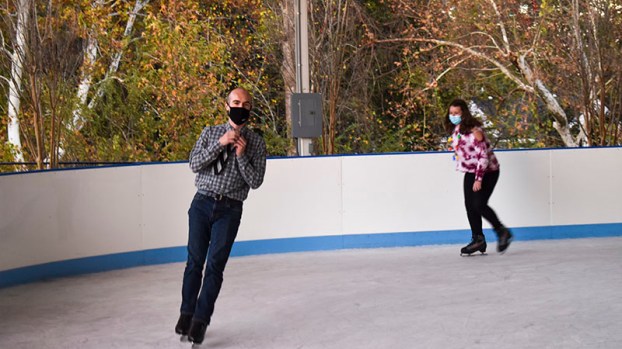 One of LaGrange’s premier holiday attractions is back. Sweetland on Ice returned on Friday, Nov. 20 for its fourth year of operation.

Amid the COVID-19 pandemic, however, there are new rules for guest to follow. Capacity is limited to 200 people, and face masks are required. Staff will also be wiping down surfaces regularly.

“We’re going to do our best to keep LaGrange safe this year,” said Amanda Sugermeyer, marketing manager for Sweetland, at Friday’s kick-off event.

“It’s such a wonderful addition for our downtown area … This is one of the many wonderful areas in LaGrange to enjoy for the holidays,” Gaskin said.

Gaskin then introduced “local legend” Myrtice Adcock, who was once again the first to skate on the rink. Adcock became a local celebrity in 1970 when she skated on Lafayette fountain, which had frozen over.

“I’m a legend not because of my skating, as you will soon witness,” Adcock told attendees before taking the ice. “But this commemorates a weather event on January 8, 1970, — there was heavy rain that night, the temperature nosedived to +2 degrees.”

Adcock, who at the time was working as a physical education teacher at LaGrange High School, called then-Mayor Gardner Newman to ask if she could skate on the frozen fountain. After getting the green light, she did so for three days.

Adcock appeared on the front page of in The LaGrange Daily News on Nov. 9, 1970. The story was picked up by the Associated Press and published in newspapers around the country.

In 2010, temperatures once again dropped low enough for Adcock to skate the fountain. And in 2017, Sweetland on Ice’s inaugural year, she was the first to skate the rink.

“Fifty years ago is quite some time back, and I appreciate being here the fourth year of [Sweetland on Ice’s] existence,” Adcock said. “Each year, those who manage this facility have made wonderful, major improvements, so they are to be commended.”

Another special guest was Robert “Robbie” Przepioski, a Columbus-based skating coach and former professional figure skater. Przepioski competed at the Championship Men’s US Figure Skating Nationals in 2014, 2015 and 2016 and has also competed at the Olympic trials.

A California native, Przepioski moved to Columbus in 2017 and works as the skate director at Columbus Figure Skating Academy. Many of his students visit Sweetland to practice — a few of them are LaGrange kids. Przepioski has also given lessons to students from all over the West Georgia area at Sweetland. It is somewhat limited, though, due to the seasonal nature of Sweetland on Ice.

“We were hoping that they can be competitive skaters, come down to Columbus and then come back here and say, ‘Hey look, we started here at this public session, hangout time. And now look at us, we’re doing shows here and all around the states.”

Sweetland’s outdoor rink is unusual for the South, Przepioski said.

“When you hear that there’s an outdoor rink you’re just like, ‘Oh, I didn’t expect that,’ especially out here, a lot of people do not know ice skating yet, it’s just starting to really kick in a little bit,” Przepioski said.

Entry to the ice skating area is free, but guests must pay to skate. Ice skating and skate rental is $14 or $10 for children 10 and under. You can also bring your own skates and pay $8 to skate. A group rate is offered for groups of 10 or more — $12 for adults and $8 for kids.

Tickets include 2 hours of skating.

Hours are 5 p.m. to 9 p.m., Thursdays and Fridays, and noon to 9 p.m., Saturdays and Sundays. The rink is closed from Monday to Wednesday, except for private parties.