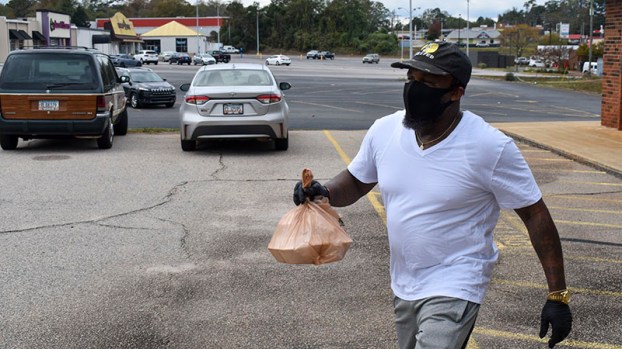 Above, GetFed co-founder Anthony Talley carries a boxed meal to a guest at the Immanuel Ministries parking lot Sunday afternoon.

GetFed co-founders Quay Boddie and Anthony Talley have been feeding the community with similar events for years, including around the holidays. This year, they opted to do a takeout model to keep people safe amid the pandemic.

GetFed targets vulnerable populations such as homeless people, indigent people and seniors. But they encouraged anyone seeking food to come by and grab a plate Sunday, even if they couldn’t eat together indoors and provide fellowship.

“You just never know who may be going through it, just needs to see a smile or get a good meal,” Boddie said.

“We don’t care where you come from, how you look, how tall you are, it don’t matter. Yeah, just come over here and get what you got to have,” Talley said.

The event started at 1, when 15 or so cars had lined up ahead of time. Throughout the afternoon there were periodic cars coming and going before a final rush around 4 p.m.

Boddie and Talley took to Facebook live to spread the word and make sure they got rid of all the food. Volunteers had prepped enough to feed about 300 people.

GetFed spent about $300 on food, Talley and Boddie said. Much of the food was donated — all of the turkeys and hams, plus lots of canned goods, cakes and pies.

An old friend of Talley’s, Elizabeth Beall, was out volunteering on Sunday, alongside her husband Patton and their children Griffin and Mary Claire. They came out not only to show support for GetFed’s mission, but to demonstrate a good example of community service to their kids.

“I feel like it’s important for our kids to see what others do for the community and give back,” Elizabeth Beall said.

GetFed had hoped to serve 300 people but were still able to give all the food away, estimating they served a little more than 200. In some cases, drivers took several plates to bring them to their family and friends. Despite not hitting the goal, serving food to just one person is rewarding, Boddie said on Monday.

Looking forward to Christmas, Boddie said GetFed plans to pick a family that is going through a rough time and “go big,” Boddie said. They hope to serve dinner and buy gifts for the whole family, once they choose one.

One of LaGrange’s premier holiday attractions is back. Sweetland on Ice returned on Friday, Nov. 20 for its fourth year... read more