30th annual Up All Night: More than 200 Thanksgiving meals given away 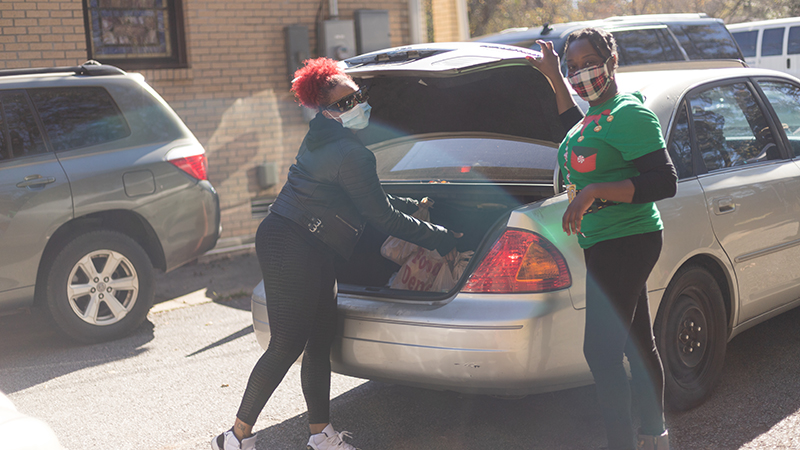 More than 200 turkeys and Thanksgiving meals were given out Tuesday morning. Despite hardships, changes and COVID-19, the Up All Night dinner was made possible for the 30th year.

For years, Jake Sessions collaborated with others in the community to distribute grocery boxes ahead of Thanksgiving.

A few years ago, Jimmy Edwards took the event over, which later rebranded as Community Dinner.

Edwards decided not to organize a large feeding event this year due to COVID-19 concerns.

Sessions decided two weeks ago to take over once again and was able to collect donated items quickly to prepare for Tuesday’s food drive.

A few days leading up to the event, Sessions had to be admitted into the hospital for health concerns so Pastor Mike Jackson of Confidence Missionary Baptist Church and Sessions sister, Alverta Pearson, stepped up to carry out the event.

“It all got started from the goodness of his heart,” Pearson said. “He has a love of helping people.”

Pearson said the pandemic gave them even more motivation to do the event this year.

When Jackson met with Pearson and Sessions about the event, they came up with the idea to host it at the church.

“Kia of LaGrange was our biggest sponsor for this,” Jackson said. “Several people in the community gave. Multiple organizations have given and made this possible. There’s still time to give even after Tuesday to help with future food drives.”

Jackson said everything from pies and turkeys to large monetary donations were donated to help make the Thanksgiving food drive a success.

“Today is just such a great day and the volunteers have come out phenomenally to make it happen,” Jackson said. “The folks behind the scenes have done so much. We would not be able to do it without all of them.”

Within 30 minutes of starting, all turkeys and meals were completely out.

Pearson said cars had begun lining up at 7:30 a.m. Tuesday morning outside of the church.  Jackson encouraged anyone not able to a meal Tuesday to utilize any other organization in town also giving away meal kits for Thanksgiving Day.

“Although Jake is in the hospital today, I am certain he would tell you all thank you and when he sees a video of all the people served he will be shouting right there on his bed,” Jackson said.

Pearson said they would hopefully do something similar for the Christmas holiday as well.

“Hopefully we will gather enough supplies and people in time for the community and they will see something like this again,” Pearson said.