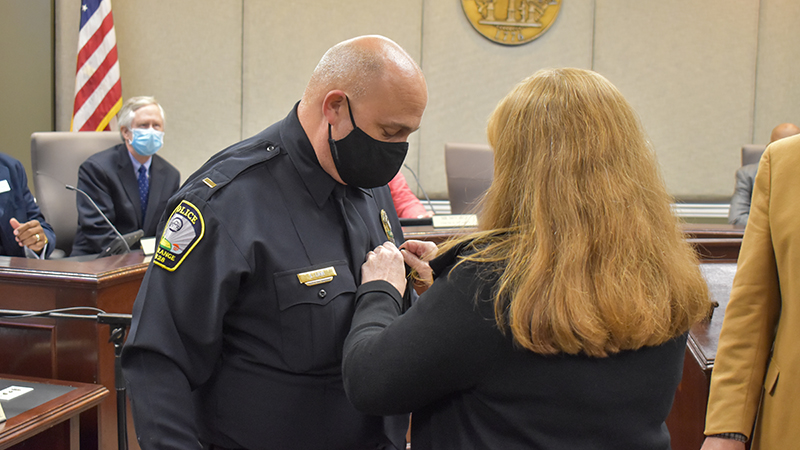 In its first meeting at council chambers since the start of the pandemic, the LaGrange City Council discussed amending the Board of Planning and Zoning Appeals ordinance surrounding food trucks and recognized a 25-year police lieutenant at its Tuesday meeting.

Council members had previously discussed provisions in the food truck ordinance limiting the amount of time a truck can park in one place. The matter was sent to the planning board.

“There are issues in the code related to not allowing to be there for more than 10 consecutive days, which is currently what the requirements are in the ordinance,” City Manager Meg Kelsey said at the council’s Tuesday morning work session.

That part of the code was created years ago, with the idea that out-of-town food trucks should not be able to permanently park in LaGrange and take away business from local restaurants that have invested in brick-and-mortar spaces.

Philip Abbott, who is currently working to open Local Groundz, a coffee shop in LaGrange, asked the city if he could keep a food truck around on a permanent basis.

City staff are proposing two changes to the ordinance. One would be a carve-out that allows local businesses to operate food trucks whenever they want, year-round.

The other change would allow out-of-town trucks to stay in a given spot two days a week, instead of the 10-consecutive-days rule.

The proposed ordinance change may be tweaked to accommodate that request before the public hearing on the matter, which is scheduled for Dec. 22.

“You don’t want to discourage people from investing in brick-and-mortar facilities, that’s the balancing act. … The reason this is an issue in every city across the state … is because nobody’s figured out how to balance that, how to avoid having no restaurants and 100 food trucks,” LaGrange Mayor Jim Thornton said at the work session.

LaGrange Police Department Lt. Eric Lohr was recognized at the evening council meeting by Thornton and LPD Chief Lou Dekmar for 25 years of service to the city.

Lohr was hired as a patrol officer in November 1995.

Over the years, he’s worked as a criminal investigations detective focusing on domestic violence, as a shift Sergeant and later as an administrative lieutenant in the patrol division. He’s also overseen the training division and recently spearheaded efforts in the school system to transition from teaching the Drug Abuse Resistance Education (DARE) program to the Law Enforcement Against Drugs (LEAD) program. Lohr now serves as division operational lieutenant, responsible for all aspects of the patrol division.

Dekmar credited Lohr with developing the civil rights curriculum in the office of training and for helping develop a protocol for rape victims who do not wish to report rapes.

“Working with the Harmony House, we created anonymous reporting, where [victims] can go in and have the test, have the rape kit done, and it’s held,” Dekmar said. “And at some point, if they change their mind, that evidence has been preserved.”

Lohr also worked on piloting the less-lethal BolaWrap device for LPD, providing recommendations to the manufacturer. The BolaWrap is a new device LPD has acquired that shoots an 8-foot tether at a suspect’s arms or legs, designed to restrict suspects who are noncompliant without seriously injuring them.

“I would characterize Eric as a utility player,” Dekmar said. “Wherever you put him, he’s going to assume those responsibilities in a serious fashion and look for ways to improve whatever role he plays,” Dekmar said.

The council also approved an amendment to an intergovernmental contract with the Development Authority of LaGrange concerning “Project Greenfield,” a new start-up business that is supposed to bring about 400 jobs over five years to LaGrange. The development is supposed to grow tens of millions of heads of lettuce in 300,000 square foot buildings.

The amendment moved the closing of the sale of the property, which is owned by the city, from Nov. 8 to February.

In other business, a proposed ordinance change that would allow windows in downtown stores to be completely covered with advertisements looks set to fail.

The idea came from Visit LaGrange President Kathy Tilley, who thought that some of the vacant buildings downtown would be made more attractive if their windows were covered with ads promoting local tourist attractions.

Council members were supportive of the idea, but legal hiccups led the planning board to recommend no change to the ordinance.

The council and city staff had noted that the city cannot legally regulate the content of the ads and were afraid it would open up the possibility of controversial advertisements — namely political ads — covering large windows. Pursuant to the city code, the council is still required to call a public hearing for the proposal, which is scheduled for Dec. 22.

Finally, the council held first and second readings of ordinances and made several board appointments:

4A second reading and of an amendment to the Department of Public Services Chapter in the city code was held; the amendment passed and was made because the department’s leadership structure is changing;

4A first reading was held to approve a uniform purchasing manual for the city;

30th annual Up All Night: More than 200 Thanksgiving…