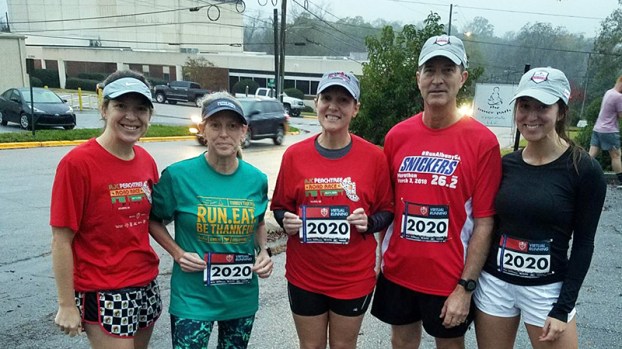 Many local runners in LaGrange that typically drive to Atlanta for the annual AJC Peachtree Road Race had to change their plans this year due to the race going virtual.

Participants received access to the Virtual Running of the AJC Peachtree Road Race App which will allowed them to track their progress on the course, upload and compare results and experience with other runners.

Emerson said since it was virtual and on Thanksgiving Day this year they just made it part of the Turkey Trot and modified the route to make it 6.2 miles.

“It was very different this year without all the fans lining the streets,” Emerson said.

“Also, running the local streets made it less exciting than getting to run the streets of Atlanta. All that being said, we still wanted to keep the Peachtree tradition going so we were willing to do whatever it takes.”

Emerson said that he hopes the race is back in person for next year.

“We love to participate and hope to continue to support the biggest 10K in the world,” Emerson said.

“It was great to be able to run with many of my running friends who also braved the weather to complete the most unique Peachtree Road Race ever.”

Another local runner, Stacey Ernstberger, said this was her second Peachtree race.

“I ran it last year with my friends Vickie Smith and Janet English,” Ernstberger said. “I didn’t treat it like a race this year. I just ran it and had fun. I would have run today even if there wasn’t a race but probably not a 10k.”

Without the Peachtree virtual race Ernstberger said she probably wouldn’t have pushed as hard.

“What fun is there in cutting the race short and cheating,” Ernstberger said. “I ran it with friends and a bunch of us met up to run it but I ran with a friend the entire way.”