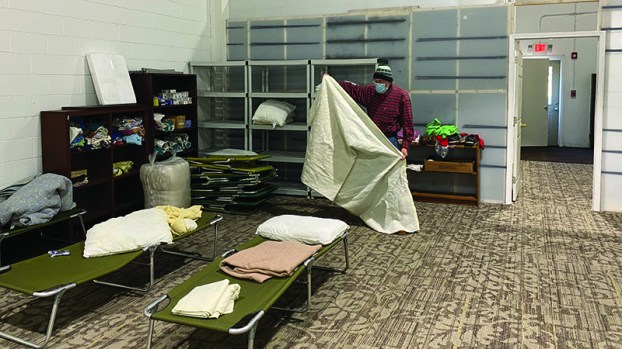 Above, a man prepares cots at the warming center at New Ventures, Inc. in LaGrange. About nine people spent the night there Monday as temperatures dropped below freezing.

As temperatures drop below 40 and 30 degrees in LaGrange, the Warming Center has reopened its doors for the winter season.

According to New Ventures CEO Mike Wilson, the Warming Center officially opened on Monday night when temperatures dropped to the low 20s and parts of Troup County experienced sleet and freezing rain.

“We had about nine people stay with us on Monday night, and I was really surprised we didn’t have more,” Wilson said. “We’re looking at the weather pattern right now it looks like a long stretch of 10 days or more of cold weather.”

Wilson said that after they get the word out and post on social media that the center is open again he expects a rise in people staying.

This year the center had to implement changes due to COVID concerns and precautions.

“Just like anywhere else, masks have to be worn, temperatures have to be taken and social distancing is in place,” Wilson said. “We’re sleeping people head to toe instead of head to head so that we can hit six feet diagonally.”

In years past, the Warming Center would open at 5 p.m. and close at 8 a.m. the following morning. This year anyone staying at the center must be out of the facility by 7 a.m.

“This is also New Ventures’ break room during the daytime,” Wilson said. “In a non-COVID year, we’ve been able to let people mingle and not rush people out especially if it’s cold. We are now closing at 7 a.m. so we can sanitize in between the night shift, the warming center and the first shift of New Ventures.”

Staff also sanitizes the room before the Warming Center opens for the evening. Wilson said they have had to change logistics with transportation due to the time change in the morning.

“I would like for churches to step up and help us by volunteering to utilize their busses or vans to come drive people back in the mornings,” Wilson said. “That would take some of the pressure off of the West Georgia Star transportation busses that help us.”

The warming center can hold up to 75 people each night it is open. Those seeking shelter from the cold can find out if the center is open on signs that are strategically posted in the community and also online.

Local law enforcement will give anyone who calls and says they are homeless a ride to the Warming Center.

Due to COVID regulations, New Ventures is not able to utilize local ministries to help cook dinners for those staying at the Warming Center.

Wilson said they are still in need of microwave meals, single serve snacks and canned drinks to help fill that gap.

Those looking to volunteer or donate to the center can get in touch with Wilson at (706) 333-7973, or send Chase Hall an email at chase.hall@edwardjones.com stating they want to be volunteers.

With less than 24 hours till Black Friday shopping begins local stores are gearing up for shoppers. For major stores,... read more