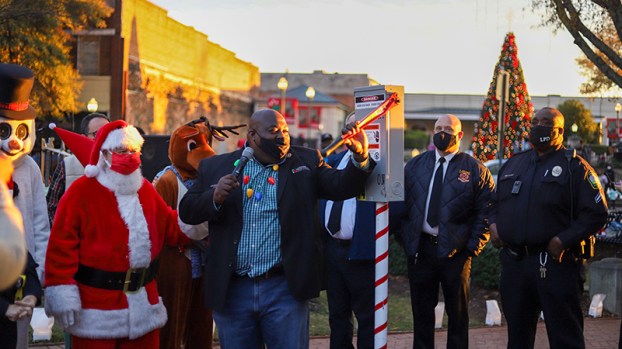 Above, LaGrange-Troup County Chamber of Commerce Chairman George Bailey pulls the lever that lit up the Christmas tree downtown on Thursday.

A crowd gathered on Lafayette Square in downtown LaGrange to witness an annual holiday tradition.

The LaGrange-Troup County Chamber of Commerce kicked off Thursday evening’s Christmas festivities by lighting the Christmas tree on the chamber plaza. The crowd watched from the square across the street, where LaGrange Mayor Jim Thornton and chamber Chairman George Bailey spoke before the lighting.

The tree was lit around 5:30 p.m. ahead of the Christmas parade, which began marching through downtown shortly after 6 p.m.

The parade, hosted by the chamber and presented by Kimberley-Clark, had the theme, “Christmas to the rescue.”

Thornton said the parade was “a wonderful opportunity for our community to come together and celebrate Christmas. It’s also a great opportunity to honor our first responders,” Thornton said.

The mayor then spoke about one of his favorite Christmas songs, “We Need a Little Christmas,” which contains the lyrics “For we need a little Christmas right this very minute.”

“That has never been more true than in December 2020 because of what we have gone through this year as a world, as a country, and yes here in our community, dealing with the COVID-19 pandemic,” Thornton said.

Thornton also thanked the chamber of commerce for not taking “the path of least resistance” by canceling the parade.

Bailey led the crowd as it counted to three, followed by “Merry Christmas” and the flipping of the light switch.

The Troup County Board of Commissioners awarded a contract for new exhaust removal systems at several fire stations at its... read more