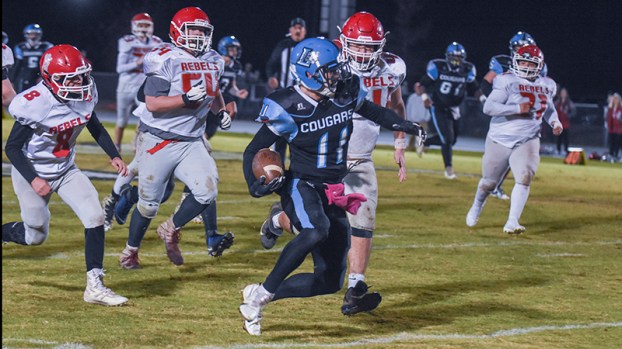 The third time’s the charm for the Lafayette Christian Cougars.

Lafayette Christian completely dominated John Hancock Academy Friday night in the Georgia Association of Private and Parochial Schools state championship game. The final score was 38-0, but it was over early as the Cougars avenged two consecutive losses in state title games.

LCS senior Cason Firth scored three times, including the game’s opening score on a 15-yard touchdown run with 4:45 left in the first quarter. He had one of the highlight plays of the night in the second quarter, as he ran through Hancock defenders on a 55-yard touchdown run to put the Cougars up 21-0.

“That was a lot of motivation, personally for me. I think most of the motivation for this year was probably beating Griffin because they were the people who took it from us last year,” Firth said. “I think after that we knew we had it in the bag. I think after that, we had so much motivation that nobody could’ve stopped us.”

Sandwiched between Firth’s touchdowns was a short touchdown run by Alex Tusing that was set up by a special teams mistake by Hancock. On a Hancock punt attempt, the ball soared well over punter Dalton Malone’s head. Malone picked the ball up in the end zone and ran for a few yards before the Cougars swarmed him to set up the short touchdown by Tusing.

Up 21-0 in the second quarter, Jacob Karvelas intercepted a pass and ran it back 30 yards to the Hancock 27-yard-line.

Nathan Karvelas finished the drive with a 5-yard touchdown run to put the Cougars up 28-0.

At the end of the half, LCS again drove deep into Hancock Academy territory. When the drive stalled around the 20-yard line, the Cougars gave Cade Parnell a chance to kick a field goal, and Parnell nailed it to put LCS up 31-0 at the half.

Firth added a third touchdown on a long run down the left sideline with 9:05 left in the third quarter to put the Cougars up 38-0.

There was about a 20-minute break in the third quarter after a Hancock Academy player was injured, but he eventually walked off the field with assistance before receiving medical attention from an AMR ambulance.

Once the game resumed, the fourth quarter went quickly as LCS closed out the title.

With the victory, the Cougars got to claim a championship in a year no one will ever forget. Firth said in the summer he wasn’t sure he’d even get to have a senior football season due to the COVID-19 pandemic.

“I didn’t know if we were going to play,” Firth said. “Once we scheduled our first game, we delayed it for two weeks, but we still played. I was happy about that.”

Bryant said when schools and athletics were shut down, the LCS community made it clear that they wanted to play.

“When we were shut down in March, when schools and athletics were shut down, every player, every parent I talked to and every coach I talked to, we wanted to play,” Bryant said. “Our country needs something to get a break from the tension with the disease and all the other social pressures. We wanted to play, so we came out in June determined that if we could play one game, we were going to play one game. If we could play a whole schedule, we were going to play that whole schedule.”

LCS had games that were canceled during COVID-19 and had to forfeit one game due to a COVID-19 exposure.

“But our guys wanted to play, and we wanted this game tonight. Our goal back in June was to be in this championship game,” Bryant said. “I am very proud of this team, this school, the faculty, the student body, the administration, I’m very proud of our parents who sacrifice a great deal to have their children here… I’m proud to be associated with this team.”

By KEVIN ECKLEBERRY Daily News The LaGrange Grangers are hoping to go somewhere they haven’t been in 12 years. In... read more