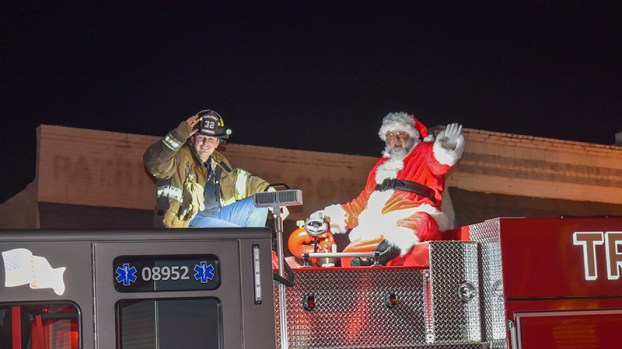 Above, Santa Claus rides on a Troup County Fire Department fire truck in the Hogansville Christmas parade on Saturday. Left, members of the Callaway High marching band play as they march along Main Street. The parade started at 6 p.m. and drew a crowd of hundreds.

“Christmas in Toyland” was the theme for the march, which started at Hogansville Elementary School before travelling down Main Street.

Festivities began earlier in the day, as a Christmas bazaar was held at Calvin Hipp Park. Vendors sold crafts, quilts, Christmas decorations, art and other items.

The finale was reserved for Santa Claus, who rode on top of a Troup County Fire Department truck. After the parade, Santa could be found in the gazebo at Calvin Hipp Park, posing for pictures.

In an interview, Stankiewicz said the parade “had a great turnout, considering the pandemic.”

The various floats and marching groups took about 20 minutes to travel by a parade-goer.

“It was a little shorter than normal, and again, that was because of the pandemic,” Stankiewicz said, adding that a typical parade would be about “50 percent or more longer.”

Despite not attracting as many floats as usual, Stankiewicz said people enjoyed the event, which brought them some holiday cheer amid the pandemic.

He also spoke with vendors who attested to a busy afternoon selling their wares.

“As an event, everybody had a great time and it went off without a hitch. It was nice,” Stankiewicz said.

The Troup County School System is updating its COVID-19 quarantine policies to mirror new guidelines from the Center for Disease... read more