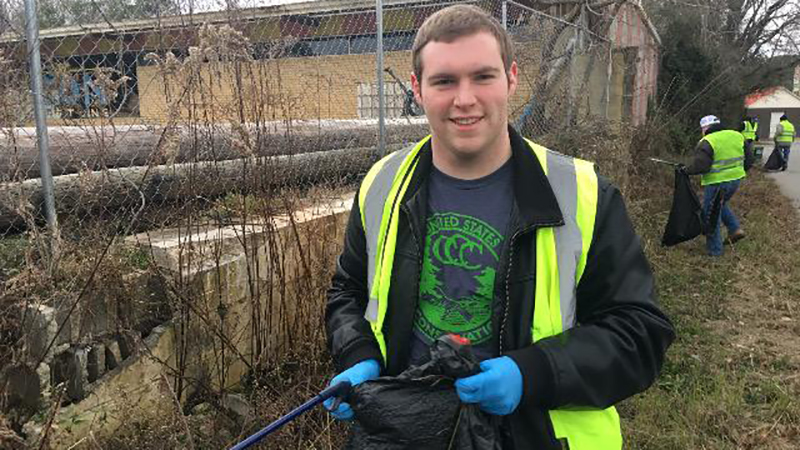 Gage Bailey, 23, is a LaGrange native who graduated from LaGrange College in May with a degree in biology. A member of the Sierra Club and Greenpeace, he discovered a passion for conservation when he took a conservation biology class taught by Mark Yates.

“He inspired me to pursue that field because beforehand, I was thinking about going into microbiology,” Bailey said. “Once I discovered what it was like to do actual fieldwork in the woods nearby and the lakes … It spoke to me, and said that preserving the environment is one of the greatest things that anyone could do.”

To that end, he’s started a new organization, Civilian Conservationists of LaGrange, to address litter in Troup County. Bailey wants to lead clean-ups at West Point Lake’s access areas — areas he believes “are oftentimes untouched or forgotten about.”

The organization, which Bailey said has 12 members, is in its nascent stages. For now, Bailey is spreading the word on Facebook and making flyers. He hopes to start cleanups soon, with the aim of eventually holding large, regular cleanups akin to the City of LaGrange’s “Leaving LaGrange Better Than We Found It” campaign.

Bailey himself has participated in those city-sponsored outings but wanted to organize something focused on West Point Lake and its access areas.

He’s also volunteered with Chattahoochee Riverkeeper, including a “Sweep the Hooch” event he attended in August that focused on Pyne Road Park.

Chattahoochee Riverkeeper is best equipped to handle trash floating down the river Bailey said, mentioning traps the organization uses to collect trash. But he sees lake access areas as more neglected. They’re also particularly vulnerable to litter because of their proximity to roads and pathways, he said.

“You can go to any spot by the shoreline, you can see piles of it [trash] just coming in,” Bailey said.

Some locals blame the trash problem on upriver polluters, arguing that trash floats down the Chattahoochee River from Atlanta, ending up in the lake.

Bailey, however, said “a lot of this trash comes from us as well. It’s a local problem, not just a regional one.”

In the past, Bailey had gone to the access areas by himself to collect trash. He’s found large, toxic items like half-empty gas cans but said the bulk of the trash is simply small, plastic waste.

Bailey is concerned about plastics not only because of their ubiquity, but because in water, they break down from sunlight into smaller pieces.

Instead of biodegrading, they eventually become microplastics, invisible to the human eye but no less harmful to aquatic wildlife.

Bailey mentioned a 2017 Ellen MacArthur Foundation and World Economic Forum report that estimated by 2050, the world’s oceans will contain more plastic than fish.

“When the fish and other aquatic wildlife consume it, it accumulates in their tissue, and they end up passing it down to future generations. And it just stays forever — it stays in the environment,” Bailey said.

Aside from cleanups, Bailey hopes the group will promote education and public awareness of environmental issues, such as litter, pollution and recycling.

When it comes to getting people onboard, Bailey thinks reaching out to avid fishermen and outdoorsmen will reap rewards.

Though he doesn’t fish much himself, those who do are generally sensitive to pollution, he said.

“A lot of people I know who love to fish, they care about the natural environment just as much and believe that we should have clean land and water,” Bailey said.

Bailey has reached out to Troup County Board of Commissioners Chairman Patrick Crews. Bailey said he’s discussed his ideas with Crews, which include putting up signs or billboard that discourage littering, complete with messages and statistics about its impact.

“Appealing to people’s emotions, once they see images, real images of the impact that litter can have on our wildlife, it can help them change their minds about their current course of action,” Bailey said.

Bailey also discussed temporary employment for people out of work, which would allow them to be hired to clean up areas around the lake.

Bailey even proposed installing security cameras at the access sites to deter polluters.

Crews said public feedback on the lake is a constant.

“Water levels, and litter in the lake, are probably the two most common complaints that the Mayor and I get about our lake,” Crews said.

Crews agreed that it was hard to control litter floating down from the Atlanta area.

But it’s also a local problem.

“When the water rises — when they leave their cups and plates and bags on the banks — and then when the water comes up, we get a heavy rain, it washes that down into the lake,” Crews said.

As far as addressing the litter problem, Crews said the county has used surveillance cameras before in places that had a “bad littering problem,” and that more could be installed.

When it comes to hiring workers to clean up areas, Crews said the Corps of Engineers was responsible for cleaning up a lot of the parks around the lake.

“Quite honestly, I think that’s why they’ve been shutting a lot of parks down is because of their cost and all,” Crews said.

Crews has also discussed a machine or vehicle that could clean parts of the lake with West Point Lake Coalition, another citizens group.

Crews said he’s spoken with the Corps about billboards. Instead of anti-littering campaigns, though, he thinks the problem could be mitigated by promoting the lake, as funding for the Corps is tied to the number of visitors to West Point Lake.

If the lake grows in popularity, so too should the resources the Corps are given to maintain it.

Moving forward, Bailey and Crews are working on meeting with the Army Corps of Engineers, which manages the lake, to discuss those ideas.

Bailey believes environmental issues are inevitably tied to public health — “it all comes back to us.”

Though focused locally on water pollution, an example he mentioned were studies showing that people living in areas with high levels of air pollution are more susceptible to respiratory illness, including COVID-19.

“We have to do our part to keep the environment healthy, and each other healthy,” Bailey said.

“It’s community service too, it’s not just this idea of … being a ‘tree-hugger.’ You’re not just hugging a tree, you’re hugging another human being as well — by keeping them safe and caring about the state of our world.”